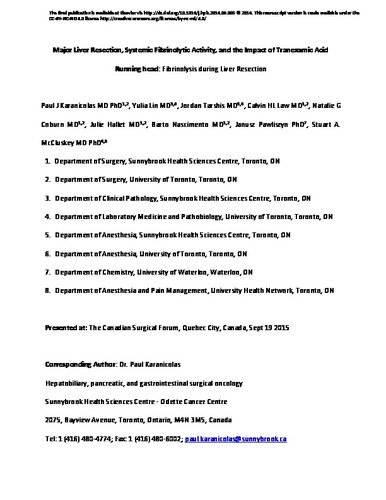 Background: Hyperfibrinolysis may occur due to systemic inflammation or hepatic injury that occurs during liver resection. Tranexamic acid (TXA) is an antifibrinolytic agent that decreases bleeding in various settings, but has not been well studied in patients undergoing liver resection. Methods: In this prospective, phase II trial, 18 patients undergoing major liver resection were sequentially assigned to one of three cohorts: (i) Control (no TXA); (ii) TXA Dose I - 1 g bolus followed by 1 g infusion over 8 h; (iii) TXA Dose II - 1 g bolus followed by 10 mg/kg/hr until the end of surgery. Serial blood samples were collected for thromboelastography (TEG), coagulation components and TXA concentration. Results: No abnormalities in hemostatic function were identified on TEG. PAP complex levels increased to peak at 1106 mu g/L (normal 0-512 mu g/L) following parenchymal transection, then decreased to baseline by the morning following surgery. TXA reached stable, therapeutic concentrations early in both dosing regimens. There were no differences between patients based on TXA. Conclusions: There is no thromboelastographic evidence of hyperfibrinolysis in patients undergoing major liver resection. TXA does not influence the change in systemic fibrinolysis; it may reduce bleeding through a different mechanism of action.