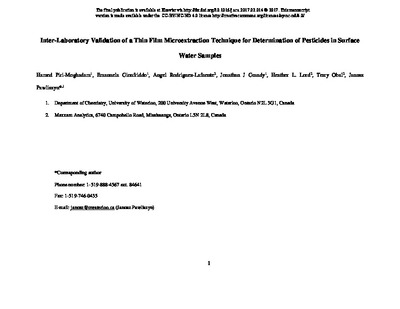 The primary goal of the present study is the inter-laboratory evaluation of a thin film microextraction (TFME) technique to be used as an alternative approach to liquid-liquid extraction (LLE). Polydimethylsiloxane/ divinylbenzene (PDMS/DVB) and PDMS/DVB-carbon mesh supported membranes were used for the extraction of 23 targeted pesticides, while a thermal desorption unit (TDU) was employed to transfer these analytes to a GC/MS instrument for separation and detection. After optimization of the most critical parameters, both membranes were capable of achieving limits of detection (LOD) in the low ng L-1 range while demonstrating excellent robustness, withstanding up to 100 extractions/desorption cycles. Furthermore, limits of quantification (LOQ) between 0.025 and 0.50 mg L-1 were achieved for the 23 compounds selected from several classes of pesticides with a wide range of polarities. A wide linear range of 0.025e10.0 mg L-1 with strong correlation to response (R-2 > 0.99) was attained for most of the studied analytes. Both membranes showed good accuracy and repeatability at three levels of concentration. Moreover, the method was also validated through blind split analyses of 18 surface water samples, collected within 3 months, using TFME at the University of Waterloo and LLE at Maxxam Analytics (Mississauga, ON) which is an accredited commercial analytical laboratory. Good agreement between the two methods was achieved with accuracy values ranging from 70 to 130%, for the majority of analytes in the samples collected. At the concentration levels investigated, 90% of the analytes were quantifiable by TFME, whereas only 53% of the compounds were reportable using the LLE method particularly at concentrations lower than 1 mg L-1. The comparison of TFME and LLE from several analytical aspects demonstrated that the novel TFME method gave similar accuracy to LLE, while providing additional advantages including higher sensitivity, lower sample volume, thus reduced waste production, and faster analytical throughput. Given the sensitivity, simplicity, low cost, accuracy, greenness and relatively fast procedure of TFME, it shows great potential for adoption in analytical laboratories as an alternative to LLE.