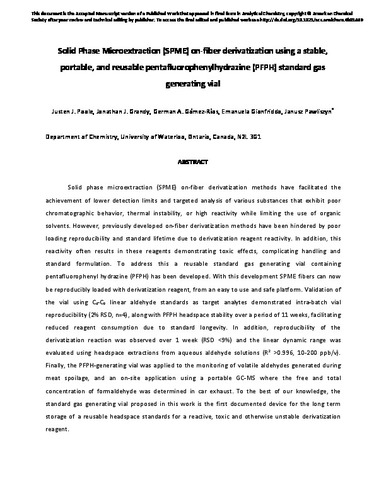 Solid phase microextraction (SPME) on-fiber derivatization methods have facilitated the achievement of lower detection limits and targeted analysis of various substances that exhibit poor chromatographic behavior, thermal instability, or high reactivity while limiting the use of organic solvents. However, previously developed on-fiber derivatization methods have been hindered by poor loading reproducibility and standard lifetime due to derivatization reagent reactivity. In addition, this reactivity often results in these reagents demonstrating toxic effects, complicating handling and standard formulation. To address this, a reusable standard gas generating vial containing pentafluorophenyl hydrazine (PFPH) has been developed. With this development, SPME fibers can now be reproducibly loaded with derivatization reagent, from an easy to use and safe platform. Validation of the vial using C-4-C-9 linear aldehyde standards as target analytes demonstrated intrabatch vial reproducibility (2% relative standard deviation (RSD), n = 4), along with PFPH headspace stability over a period of 11 weeks, facilitating reduced reagent consumption due to standard longevity. In addition, reproducibility of the derivatization reaction was observed over 1 week (RSD < 9%), and the linear concentration range was evaluated using headspace extractions from aqueous aldehyde solutions (R-2 > 0.996, 10-200 ppb v/v). Finally, the PFPH-generating vial was applied to the monitoring of volatile aldehydes generated during meat spoilage, as well as an on-site application where the free and total concentration of formaldehyde was determined in car exhaust using a portable GC/MS. To the best of our knowledge, the standard gas generating vial proposed in this work is the first documented device for the long-term storage of reusable headspace standards for a reactive, toxic, and otherwise unstable derivatization reagent standard.