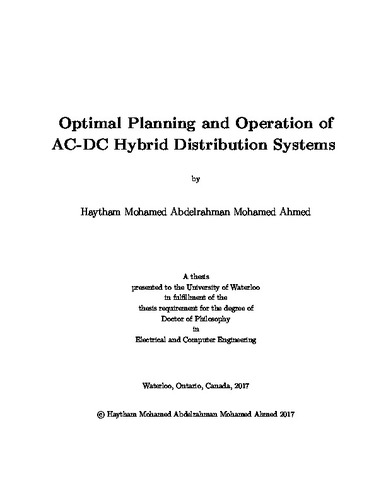 Recent years have been marked by a significant increase in interest in green technologies, which have led to radical changes in the way electric power is generated and utilized. These changes have been accompanied by greater utilization of DC-based distributed generators (DGs), such as photovoltaic (PV) panels and fuel cells, as well as DC-based load demands, such as electric vehicles (EVs) and modern electronic loads. In addition to accommodating these technologies, future distribution systems (DSs) will also need to support the integration of additional battery storage systems with renewable DGs. A further factor is the number of policies that have been implemented in Ontario, Canada, with the goal of encouraging the use of clean energy. The first, the feed-in-tariff (FIT) program, was introduced to promote the application of renewable DGs, including PV panels and wind DGs, and a second, new program that offers incentives for switching to EVs has been announced recently. The result is that future DSs must include additional DC loads and DC-based DGs along with their present AC loads and energy resources. Future DSs should thus become AC-DC hybrids if they are to provide optimal accommodation of all types of AC and DC loads and DGs. These considerations accentuate the need for reliable techniques appropriate for the planning and operation of future hybrid DSs. This thesis presents new directions for the planning and operation of AC-DC hybrid DSs. The main target of the research presented in this thesis is to optimally accommodate the expected high penetration of DC loads and DC-based DGs in future DSs. Achieving this target entailed the completion of four consecutive parts: 1) developing a unified load flow (LF) model for AC-DC hybrid DSs, 2) introducing an energy management scheme (EMS) for the optimal operation of AC-DC hybrid DSs, 3) introducing a planning model to determine the optimal AC-DC network configuration that minimizes the costs of the hybrid DS, and 4) developing a reliability-based planning technique for the simultaneous optimization of the DS costs and reliability. The first part of this research introduces a novel unified LF model for AC-DC hybrid DSs. The LF model can be applied in hybrid DSs with a variety of configurations for AC/DC buses and AC/DC lines. A new classification of DS buses is introduced for LF analysis. Three binary matrices, which are used as a means of describing the configuration of the AC and DC buses and lines, have been employed in the construction of the unified power equations. The LF model is generic and can be used for both grid-connected and isolated hybrid DSs. The new model has been tested using several case studies of hybrid DSs that include different operational modes for the AC and DC DGs. The effectiveness and accuracy of the developed LF model has been verified against the steady-state solution produced by PSCAD/EMTDC software. The second part presents a two-stage EMS that can achieve optimal and reliable operation for AC-DC hybrid DSs. The first stage introduces a network reconfiguration algorithm to determine the optimal day-ahead reconfiguration schedule for a hybrid DS, while considering the forecasted data for load demands and renewable DGs. The objective of the reconfiguration algorithm is the minimization of DS energy losses. The second stage introduces a real-time optimal power flow (OPF) algorithm that minimizes the DS operation costs. In addition, a load-curtailment-management (LCM) technique is integrated with the OPF algorithm in order to guarantee optimal and reliable DS operation in the case of abnormal operating conditions. The third part presents a novel stochastic planning model for AC-DC hybrid DSs. Taking into account the possibility of each line/bus being AC or DC, the model finds the optimal AC-DC hybrid configuration of buses and lines in the DS. It incorporates consideration of the stochastic behavior of load demands and renewable DGs. The stochastic variations are addressed using a Monte-Carlo simulation (MCS). The objective of the planning model is the minimization of DS investment and operation costs. The developed planning model has been employed for finding the optimal configuration for a suggested case study that included PV panels, wind DGs, and EV charging stations. The same case study was also solved using a traditional AC planning technique in order to evaluate the effectiveness of the hybrid planning model and the associated cost-savings. The last part of this research introduces a stochastic multi-objective optimization model for the planning of AC-DC hybrid DSs. The introduced model determines the optimal AC-DC network configuration that achieves two objectives: 1) minimizing system costs, and 2) maximizing system reliability. Network buses and lines can become either AC or DC in order to achieve the planning objectives. The model features an MCS technique for addressing stochastic variations related to load demands and renewable DGs. The developed model has been tested using a case study involving a hybrid DS that included a variety of types of loads and DGs. Solving the same case study using a traditional AC planning technique provided verification of the benefits offered by the developed model, whose efficacy was confirmed through a comparison of the AC and hybrid Pareto fronts. The developed planning framework represents an effective technique that can be used by DS operators to identify the optimal AC-DC network configuration of future hybrid DSs.