In Search Of Most Complex Regular Languages 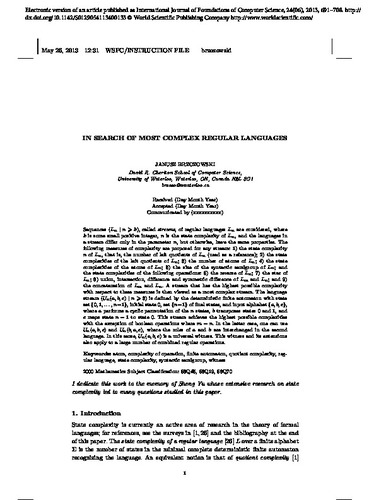 Sequences (L-n vertical bar n >= k), called streams, of regular languages L-n are considered, where k is some small positive integer, n is the state complexity of L-n, and the languages in a stream differ only in the parameter n, but otherwise, have the same properties. The following measures of complexity are proposed for any stream: (1) the state complexity n of L-n, that is the number of left quotients of L-n (used as a reference); (2) the state complexities of the left, quotients of L-n; (3) the number of atoms of L-n; (4) the state complexities of the atoms of L-n; (5) the size of the syntactic semigroup of L; and the state complexities of the following operations: (6) the reverse of L-n; (7) the star; (8) union, intersection, difference and symmetric difference of and L-n; and the concatenation of L-m and L-n. A stream that has the highest possible complexity with respect to these measures is then viewed as a most complex stream. The language stream (U-n (a, b, c) vertical bar n >= 3 is defined by the deterministic finite automaton with state set {0, 1, ..., n-1}, initial state 0, set {n-1} of final states, and input alphabet {a, b, c}, where a performs a cyclic permutation of the;a states, b transposes states 0 and 1, and c maps state n - 1 to state 0. This stream achieves the highest possible complexities with the exception of boolean operations where m = n. In the latter case, one can use U-n (a, b, c) and U-n(a, b, c), where the roles of a and b are interchanged in the second language. In this sense, U-n (a, b, c) is a universal witness This witness and its extensions also apply to a large number of combined regular operations.