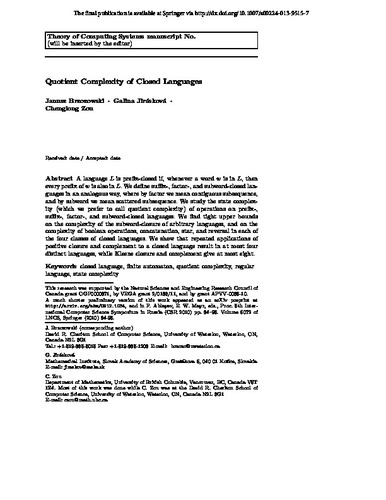 A language L is prefix-closed if, whenever a word w is in L, then every prefix of w is also in L. We define suffix-, factor-, and subword-closed languages in an analogous way, where by factor we mean contiguous subsequence, and by subword we mean scattered subsequence. We study the state complexity (which we prefer to call quotient complexity) of operations on prefix-, suffix-, factor-, and subword-closed languages. We find tight upper bounds on the complexity of the subword-closure of arbitrary languages, and on the complexity of boolean operations, concatenation, star, and reversal in each of the four classes of closed languages. We show that repeated applications of positive closure and complement to a closed language result in at most four distinct languages, while Kleene closure and complement give at most eight.