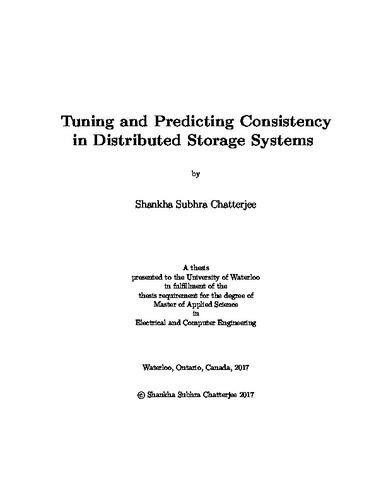 Distributed storage systems are constrained by the finite speed of propagation of information. The CAP (which stands for consistency, availability, and partition tolerance) theorem states that in the presence of network partitions, a choice has to be made in between availability and consistency. However, even in the absence of failures, a trade-off between consistency and latency of operations (reads and writes) exists. Eventually consistent storage systems often sacrifice consistency for high availability and low latencies. One way to achieve fine-tuning in the consistency-latency trade-off space is to inject artificial delays to each storage operation. This thesis describes an adaptive tuning framework that is able to calculate the values of artificial delay to be injected to each storage operation to meet a specific target consistency. The framework is able to adapt nimbly to environmental changes in the storage system to maintain target consistency levels. It consists of a feedback loop which uses a technique called spectral shifting at each iteration to calculate the target value of artificial delay from a history of operations. The tuning framework is able to converge to the target value of artificial delay much faster than the state-of-art solution. This thesis also presents a probabilistic analysis of inconsistencies in eventually consistent distributed storage systems operating under weak (read one, write one) consistency settings. The analysis takes into account symmetrical (same for reads and writes) artificial delays which enable consistency-latency tuning. A mathematical formula for the percentage of inconsistent operations is derived from other environmental parameters pertaining to the storage system. The formula's predictions for the proportion of inconsistent operations match observations of the same from a stochastic simulator of the storage system running 10^6 operations (per experiment), and from a widely used key-value store (Apache Cassandra) closely.