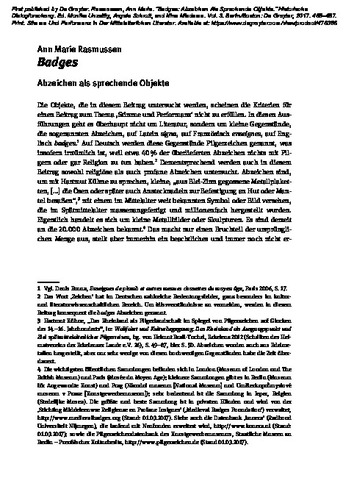 This article presents early findings regarding the interplay between script (text) and image on medieval badges, which are small, brooch-like objects made from lead-tin alloy (pewter) and adorned with familiar images drawn from both religious and secular iconographies. Badges were mass-produced in the high and late Middle Ages and widely used north of the Alps. The analysis in this article provides the following taxonomy of script-bearing badges: (1) script as image; (2) script that confirms the image; (3) script that challenges the images; (4) script as prayer; (5) speaking images. One important finding is that badges sporting vernacular language texts are the most complex because image and text often contradict or play off of one another, and so assume that viewers can read both image and text. A second, interesting finding is that some badges use script to suggest that the badge itself is speaking.