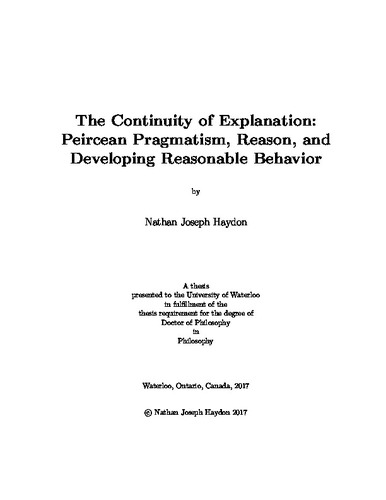 Charles Peirce, the founder of Pragmatism, is not known for having developed a normative and ethical theory. His remarks on ethics and normativity are scattered and sparse. There is nonetheless increasing interest in developing these aspects of Peirce’s thought. Peirce takes logic to fall under the normative sciences and the open question, as I take it here, is whether the normativity Peirce takes to be present in logic and inquiry can be generalized to form an ethical theory. Most broadly Peirce takes an ethical theory to be a general guide for conduct — it is a guide for conduct in thought, action or behavior more generally, and in feeling. The question becomes whether Peirce’s theory of logic and inquiry can offer a more general guide for conduct. Peirce’s writings on the classification of the normative sciences, as well as his ‘Philosophy and the Conduct of Life,’ have led many scholars to answer in the negative. I think that an ethical theory nonetheless arises from within Peirce’s writings on logic and inquiry. In this dissertation, I lay the foundation for this alternative approach by showing how Peirce’s theory of logic and inquiry serves as a guide for behavior. The basis for the argument can be briefly summarized. Peirce’s logic and theory of inquiry provide normative standards that apply to changes in belief. Peirce takes the formation of a belief to be an inference, and Peirce’s logic and theory of inquiry give us the tools (at least the thought goes) to evaluate these inferences. Peirce also supposes a connection between belief and action. According to Peirce the meaning of a belief is the mode of action the belief establishes. The conjunction of these two claims suggests how a more general guide for conduct can be motivated from within Peirce’s writings. It suggests that for the Peircean pragmatist the normative standards that apply to belief formation apply directly to established modes of action. This dissertation offers a systematic development of this connection. I show how Peirce takes normative standards to apply to belief, and then show how these standards correspond directly to changes in an individual’s behavior. I begin with a characterization of Peircean pragmatism based on what I call the Continuity of Explanation. The Continuity of Explanation is the commitment that every judgment entails consequences for action that are accountable to scientific investigation. The Continuity of Explanation captures what I take to be the core aspects of Peirce’s theory of judgment and inquiry. It follows from situating the role the pragmatic maxim serves in regulating scientific inquiry and distilling this maxim through Peirce’s theory of judgment. I go on to demonstrate how the Continuity of Explanation serves as a guide for developing more reasonable behavior. The characterization of Peircean pragmatism in terms of the Continuity of Explanation yields further advantages. It provides a unified framework to view Peirce’s metaphysics, offers a straightforward account of Peirce’s theory of action, and can account for Peirce’s increasing emphasis on the development of concrete reasonableness.