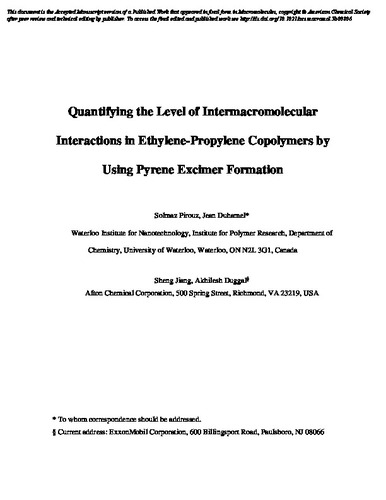 A unique methodology based on fluorescence measurements is introduced to quantitatively measure the actual level of interpolymeric association between ethylene-propylene (EP) copolymers used as viscosity index improvers (VIIs) in engine oils. To this end, two EP copolymers, one amorphous (EP(AM)) and the other semicrystalline (EP(SM)), were maleated and then fluorescently labeled with 1-pyrenemethylamine and 2-(2-naphthyl)-ethylamine to yield Py-EP and Np-EP, respectively. Successful maleation and fluorescence labeling were confirmed by Fourier transform infrared (FTIR) spectroscopy. The level of crystallinity of the EP copolymers was inferred from FTIR, carbon nuclear magnetic resonance (C-13 NMR), and differential scanning calorimetry (DSC) experiments. The solution behavior of the EP copolymers was characterized by conducting intrinsic viscosity measurements as a function of temperature to define the temperature range where fluorescence studies should be conducted. Fluorescence resonance energy transfer (FRET) experiments were used to demonstrate the existence of interpolymeric associations, but a quantitative measure of the actual level of association, such as the molar fraction of interpolymeric interaction (f(inter)) between EP copolymers, could not be determined by FRET. However, taking advantage of the fact that the fluorescence intensity ratio I-E/I-M of excimer-to-monomer is directly proportional to the local pyrene concentration [PY](loc) of a pyrene-labeled polymer, a quantitative measure of the actual level of intermolecular association was obtained by measuring the I-E/I-M ratio. Results showed that f(inter) of pyrene-labeled EP(SM) increased upon decreasing the temperature and increasing the polymer concentration as would have been expected from such a polymer. This result suggests that pyrene excimer formation provides a reliable method to quantitatively determine f(inter) for EP copolymers used as VIIs, an information which is otherwise difficult to extract from standard FRET experiments.