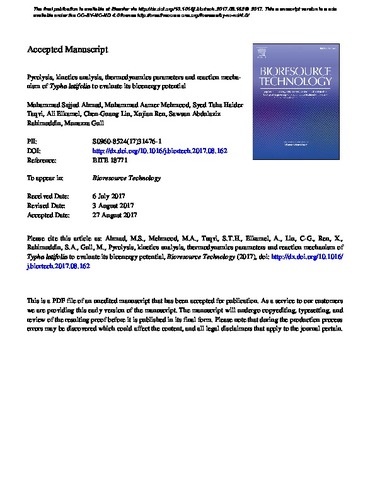 This work was focused on understanding the pyrolysis of Typha latifolia. Kinetics, thermodynamics parameters and pyrolysis reaction mechanism were studied using thermogravimetric data. Based on activation energies and conversion points, two regions of pyrolysis were established. Region-I occurred between the conversion rate 0.1 to 0.4 with peak temperatures 538K, 555K, 556K at the heating rates of 10 Kmin-1, 30 Kmin-1, and 50 Kmin-1, respectively. Similarly, the Region-II occurred between 0.4 to 0.8 with peak temperatures of 606K, 621K, 623K at same heating rates. The best model was diffusion mechanism in Region-I. In Region-II, the reaction order was shown to be 2nd and 3rd. The values of activation energy calculated using FWO and KAS methods (134-204 kJ mol-1) remained same in both regions reflecting that the best reaction mechanism was predicted. Kinetics and thermodynamic parameters including E, ΔH, ΔS, ΔG shown that T. latifolia biomass is a remarkable feedstock for bioenergy.