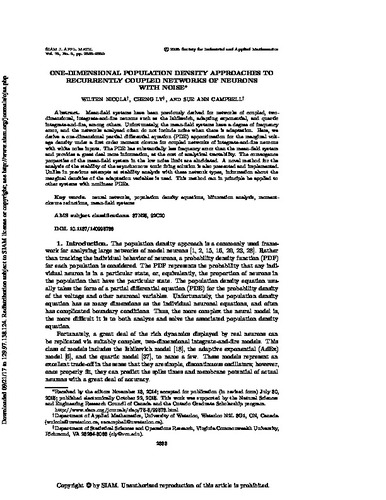 Mean-field systems have been previously derived for networks of coupled, two-dimensional, integrate-and-fire neurons such as the Izhikevich, adapting exponential, and quartic integrate-and-fire, among others. Unfortunately, the mean-field systems have a degree of frequency error, and the networks analyzed often do not include noise when there is adaptation. Here, we derive a one-dimensional partial differential equation (PDE) approximation for the marginal voltage density under a first order moment closure for coupled networks of integrate-and-fire neurons with white noise inputs. The PDE has substantially less frequency error than the mean-field system and provides a great deal more information, at the cost of analytical tractability. The convergence properties of the mean-field system in the low noise limit are elucidated. A novel method for the analysis of the stability of the asynchronous tonic firing solution is also presented and implemented. Unlike in previous attempts at stability analysis with these network types, information about the marginal densities of the adaptation variables is used. This method can in principle be applied to other systems with nonlinear PDEs.