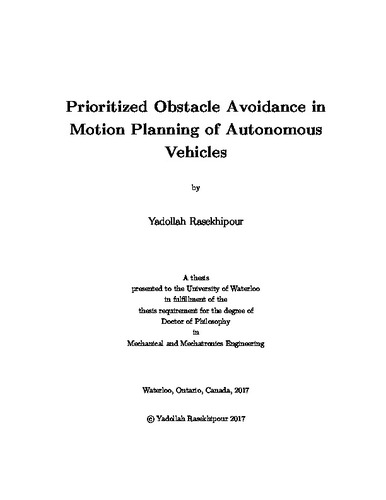 Driver errors are a critical factor of the majority of car crashes. Autonomous vehicles take drivers and driver errors out of the equation, so they are being developed to reduce car crashes. However, in some situations, a crash is unavoidable even for an autonomous vehicle. An autonomous vehicle is expected to behave properly in such a situation. Crashing into different obstacles have different costs based on the injury or damage the crash might cause. In an imminent crash situation, an autonomous vehicle is expected to consider these costs and plan a trajectory that avoids the obstacles with the highest priorities. In this thesis, a motion planning Model Predictive Controller (MPC) has been developed that plans the vehicle’s trajectories based on the obstacle’s priorities. Motion planning MPCs usually use potential fields or obstacle constraints for obstacle avoidance. However, they treat all the obstacles in the same way. Two methods have been developed in this thesis to prioritize obstacles in motion planning. The first method prioritizes obstacles based on their avoidance necessities. It categorizes obstacles as crossable and non-crossable, and assigns a potential function to each category corresponding to its avoidance necessity. The second method prioritizes obstacles based on their corresponding crash costs. It applies lexicographic optimization on the MPC to prioritize the non-crossable obstacles according to their crash costs by prioritizing their corresponding constraints. A motion planning MPC problem is generally a nonlinear MPC problem. It is usually approximated by a quadratic MPC problem to become implementable in real time. In this thesis, a quadratic motion planning MPC has been developed. This MPC has a linear vehicle model and linear vehicle and obstacle constraints. The linear vehicle model along with the linear vehicle constraints should be able to model the nonlinear vehicle behavior. A linear bicycle model has been utilized, and linear tire constraints have been developed such that they can model the nonlinear vehicle behavior at the tire force limits. Moreover, a linear obstacle constraint set misses some of the feasible trajectories in the process of convexifying the obstacle-free area. An iterative obstacle avoidance method has been developed in this thesis to reduce the number of feasible trajectories missed due to the convexification. The performance of the developed motion planning MPC has been evaluated in a computer simulation with a high fidelity vehicle model. The MPC has been simulated for test scenarios to evaluate its performance in autonomous driving and prioritizing obstacles. The capabilities of the developed tire constraints and the iterative obstacle avoidance method have also been observed. The motion planning MPC has also been implemented on an autonomous test vehicle platform to show that it is implementable in real time and to validate the simulation results.