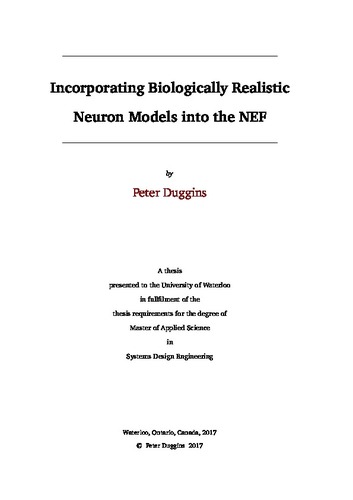 Theoretical neuroscience is fundamentally concerned with the relationship between biological mechanisms, information processing, and cognitive abilities, yet current models often lack either biophysical realism or cognitive functionality. This thesis aims to partially fill this gap by incorporating geometrically and electrophisologically accurate models of individual neurons into the Neural Engineering Framework (NEF). After discussing the relationship between biologically complex neurons and the core principles/assumptions of the NEF, a neural model of working memory is introduced to demonstrate the NEF's existing capacity to capture biological and cognitive features. This model successfully performs the delayed response task and provides a medium for simulating mental disorders (ADHD) and its pharmacological treatments. Two methods of integrating more biologically sophisticated NEURON models into the NEF are subsequently explored and their ability to implement networks of varying complexity are assessed: the trained synaptic weights do realize the core NEF principles, though several errors remain unresolved. Returning to the working memory model, it is shown that bioneurons can perform the requisite computations in context, and that simulating the biophysical effects of pharmacological compounds produces results consistent with electrophysiological and behavioral data from monkeys.