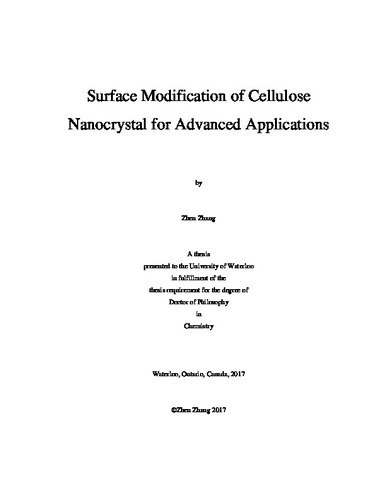 Cellulose nanocrystals (CNC) are bio-based nanoparticles, which display an array of interesting properties related to their renewability, biocompatibility, high tensile strength and elastic modulus, high aspect ratio, low density, low coefficient of thermal expansion, and liquid crystal behavior. As a result, CNC can be exploited in a wide variety of applications, which include the fields of composites, catalysts, emulsions or colloidosomes. However, the engineering of innovative nanomaterials from CNC generally requires a fine control of their surface properties by chemical modification, to tailor their dispersive, interfacial and self-assembling properties, or to introduce novel functionalities. In this context, the surface functionalization of cellulose nanocrystals by esterification and Surface-Initiated Atom Transfer Radical Polymerization (SI-ATRP) reactions was envisaged, with the objective to develop novel advanced materials. The first chapter describes the state-of-the-art of the field in which the cellulose nanocrystals are presented, with their properties, methods of functionalization and potential applications. A brief overview of the SI-ATRP reaction is also given. In the second chapter, a convenient method is proposed to directly characterize the polymer grafted by SI-ATRP on the CNC surface, without cleaving the polymer from the nanoparticle. The SI-ATRP grafting of polystyrene (PS) at the CNC surface was performed from brominated CNC initiators, in the presence of a sacrificial initiator. With this work, we show that Dynamic light scattering (DLS) is a convenient tool to monitor the polymerization process, while differential scanning calorimetry (DSC) can be used to verify if the polymerization rates of the grafted and free polymers coincide. Finally, we demonstrate that thermogravimetric analysis (TGA) can be used to directly estimate the molecular weight of the PS grafted at the surface of the CNC without cleaving the polymer from the nanoparticle. In the third chapter, both SI-ATRP and Surface-Initiated Activator Re-Generated by Electron Transfer ATRP (SI-ARGET ATRP) were conducted to graft PS and P4VP on the surface of CNC. The SI-ATRP and SI-ARGET ATRP approaches were systematically compared to evaluate the potential benefit of each method. The surface initiating efficiencies (SIE) of the CNC-Br macroinitiators with regards to styrene or P4VP were evaluated by TGA and EA, respectively. The combination of analytical methods such as FT-IR, DLS, DSC, TGA, and EA demontrated that the SI-ARGET ATRP reaction favored the grafting of longer polymer chains with lower grafting densities compared with the classical SI-ATRP method. The impact of catalyst concentration and propagation rate on the differences noted was particularly discussed. In the fourth chapter, pH-responsive P4VP-g-CNC nanohybrids were prepared by SI-ATRP and subsequently used to stabilize gold nanoparticles (Au NPs) and produce recyclable catalysts. The presence of P4VP brushes at the CNC surface led to the growing of Au NPs of lower averaged diameter compared with the diameter of the Au NPs deposited on pristine CNC. The catalytic performance of pristine Au NPs, Au NPs stabilized by CNC (Au@CNC) and Au NPs stabilized by P4VP-g-CNC (Au@P4VP-g-CNC) were then compared, through the measurement of the turnover frequency (TOF) obtained after catalytic reduction of 4-nitrophenol (4NP), used as a model reaction. Compared with pristine Au NPs, the catalytic activity of Au@CNC and Au@P4VP-g-CNC were about 10 and 24 times better, respectively. Moreover, the Au@P4VP-g-CNC material could be conveniently recovered by flocculation at basic pH, and the recycled catalyst remained highly active. In the fifth chapter, Ultraviolet (UV)-responsive poly(cinnamoyloxy ethyl methacrylate) (PCEM) was grafted on CNC using SI-ATRP. The resultant PCEM-grafted CNC (PCEM-g-CNC) exhibits high UV absorption properties and undergoes crosslinking under UV irradiation. When the PCEM-g-CNC nanohybrids were incorporated in poly(vinyl chloride), transparent composite films with UV-blocking properties were obtained. The comparison of the optical and mechanical properties of the films before and after UV-irradiation allowed it to be demonstrated that the PCEM-g-CNC nanoparticles also acted as thermal and UV-stabilizers for PVC. Meanwhile, the tensile mechanical properties of the PVC film were significantly improved, and further increased after UV-irradiation. In the sixth chapter, a facile method to prepare colloidosomes at room temperature is proposed from w/o inverse Pickering emulsions containing silica precursors and stabilized by cinnamate modified CNC (Cin-CNC). Cin-CNC Pickering surfactants were prepared by acylation with an excess of cinnamoyl chloride. The Cin-CNC surface displayed partial wettability with both toluene and water, which allowed stabilization w/o inverse Pickering emulsions. The Cin-CNC particles around the droplets were subsequently locked by cross-linking TEOS or TBOS silica precursors at the water/toluene interface, leading to an intricate network of polysiloxane within the Cin-CNC shell. In optimized conditions, the Cin-CNC/silica colloidosomes obtained displayed a robust shell and slow releasing capacity with regards to encapsulated molecules such as rhodamine B or fluorescent deoxyribonucleic acid (DNA). In the last chapter, we summarized the general conclusions of the thesis and proposed some recommendations for the future work. The cellulose nanocrystals were modified by esterification and surface initiated Atom Transfer Radical Polymerization. The characterization, mechanism and advanced applications of the functionalized CNC were envisaged. Based on the research and results in this project, we also proposed some recommendations for the future work on the modification of CNC and the other advanced applications.