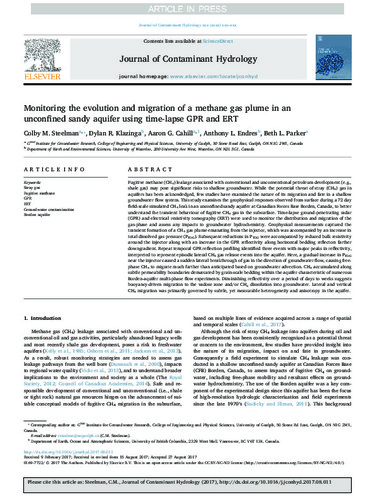 Fugitive methane (CH4) leakage associated with conventional and unconventional petroleum development (e.g., shale gas) may pose significant risks to shallow groundwater. While the potential threat of stray (CH4) gas in aquifers has been acknowledged, few studies have examined the nature of its migration and fate in a shallow groundwater flow system. This study examines the geophysical responses observed from surface during a 72 day field-scale simulated CH4 leak in an unconfined sandy aquifer at Canadian Forces Base Borden, Canada, to better understand the transient behaviour of fugitive CH4 gas in the subsurface. Time-lapse ground-penetrating radar (GPR) and electrical resistivity tomography (ERT) were used to monitor the distribution and migration of the gas-phase and assess any impacts to groundwater hydrochemistry. Geophysical measurements captured the transient formation of a CH4 gas plume emanating from the injector, which was accompanied by an increase in total dissolved gas pressure (PTDG). Subsequent reductions in PTDG were accompanied by reduced bulk resistivity around the injector along with an increase in the GPR reflectivity along horizontal bedding reflectors farther downgradient. Repeat temporal GPR reflection profiling identified three events with major peaks in reflectivity, interpreted to represent episodic lateral CH4 gas release events into the aquifer. Here, a gradual increase in PTDG near the injector caused a sudden lateral breakthrough of gas in the direction of groundwater flow, causing free-phase CH4 to migrate much farther than anticipated based on groundwater advection. CH4 accumulated along subtle permeability boundaries demarcated by grain-scale bedding within the aquifer characteristic of numerous Borden-aquifer multi-phase flow experiments. Diminishing reflectivity over a period of days to weeks suggests buoyancy-driven migration to the vadose zone and/or CH4 dissolution into groundwater. Lateral and vertical CH4 migration was primarily governed by subtle, yet measurable heterogeneity and anisotropy in the aquifer.