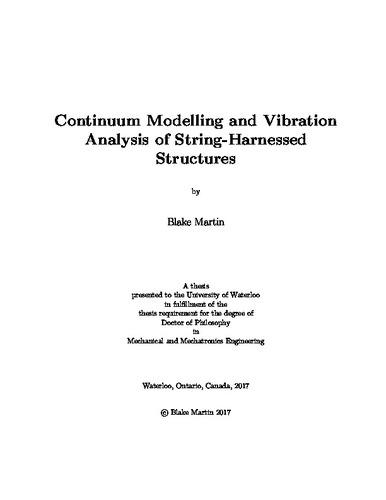 Power and signal cables in recent years have been observed to constitute a major component in the dynamic behaviour of space structures. In a typical system, the cables-to-payload mass ratio can be as high as 20%. Ignoring the effects of these space flight cables has led to model inaccuracies in the dynamic analysis of such structures. Obtaining simple analytical solutions that can predict the dynamic behaviour of these structures has numerous advantages for vibration suppression using active control system, structural design, and modelling before their launch. As a result, mission accuracy is less likely to be jittered to due disturbances in the space environment. The intention of the presented work is to develop low-order high-fidelity partial differential equation models for the transverse bending of harnessed structures. The focus is on string-harnessed beam structures as a way to study the mass and stiffness effects of the space flight cables. In this thesis, strings are assumed to not be able to have a varying stress distribution across the cross section, unlike a cable. A continuum modelling approach is developed for the string-harnessed system and a homogenization technique is applied to obtain the governing equation of motion. Two periodic wrapping patterns for the string are initially considered such that the homogenization technique may be applied. The results are compared with numerical simulations and experimental results and are shown to agree quite well. Subsequently, non-periodic wrapping patterns are investigated and a perturbation theory approach is employed to determine the frequencies and mode shapes. The Lindstedt-Poincare method is applied to an Euler-Bernoulli model for the transverse vibrations with non-constant coefficients and extended to include additional corrections to the frequencies and mode shapes than previously considered in the literature. Furthermore, various ways to choose the reference values from which the system is perturbed are considered and compared for their effect on the accuracy of the solution. Numerical and experimental results for the frequency response functions are shown to be in strong agreement for both the periodic and non-periodic wrapping pattern cases. Finally, a model approximation method is developed to determine an equivalent constant coefficient model for the transverse displacement of the string-harnessed system. The model approximation method uses the perturbation theory results to predict the frequencies and mode shapes of the system, then applies an inverse problem approach to determine the approximate model. Numerical simulations are performed and show that the approximate model is quite capable of predicting the frequencies and mode shapes of the system for both periodic and non-periodic wrapping patterns. Frequency response functions for the approximate model are also compared to previous experimental results and are shown to be in very good agreement.