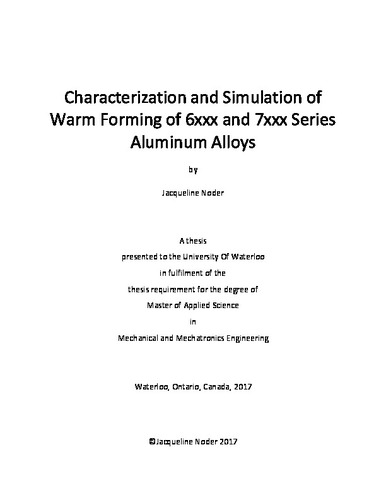 This thesis investigates warm forming of 6000 and 7000 series aluminum alloys, namely AA6013 T6, AA7075 T6 and a developmental 7000 series alloy (designated AA70XX T76), including characterization and validation of the material constitutive and friction behaviour at elevated temperature. Experiments and supporting numerical models were developed of warm cup drawing, as well as definition of the thermal process window for a near-commercial structural rail part. The hardening behavior of the AA70XX T76 was well-captured through a temperature- and rate-dependent modification of the Hockett-Sherby model [1] which was developed and calibrated as part of this work. This model was fit to constitutive data measured by DiCecco [2] and Rahmaan [3]. A steady-state coefficient of friction (COF) of 0.032 for the synthetic alcohol-based Fuchs (Forge Ease AL278), 0.007 for the Teflon film, 0.048 for the graphite-based OKS 536, and 0.047 for the LPS Dry Film PTFE Spray, was obtained in the Twist Compression Test (TCT) at a test temperature of 170°C. For uncoated tooling, the steady-state COF and observation of surface damage demonstrated early film breakdown for the LPS Dry Film PTFE Spray at 170°C whereas the OKS 536 experienced failure at the end of the 50 mm sliding distance at 200°C. Fuchs exhibited onset of scoring only at 230°C. Scoring was prevented by using the Fuchs lubricant in combination with CrWN PVD-coated tooling. Circular cup draw operations were performed to assess the performance of the different lubricants under warm forming conditions. Punch force was identified as the most sensitive ranking parameter followed by visual inspection of surface condition, measurement of cup flange perimeter, and draw-in length. The obtained lubricant ranking in the draw experiments was in good accordance with the performance results from the TCT. The earing profile of drawn cups revealed strong in-plane anisotropy for AA70XX T76 versus moderate in-plane anisotropy for AA7075 T6 and AA6013 T6, respectively. Numerical models of the cup-draw operations were developed for AA70XX T76 considering the calibrated rate-dependent hardening model and temperature-dependent COF. A rather complex plasticity formulation was needed to capture the earing response of the AA70XX T76 alloy, using a non-associative Barlat YLD2000-2d [4] function for the plastic potential and a Hosford [5] yield function (as implemented within a user subroutine by Prof. Butcher [6]). While the earing profile (number and shape of ears) was in good experimental agreement, some discrepancies in the peak force and surface strains were observed that were believed to be attributed to model simplifications. The final aspect of this research involved the warm forming of a near-commercial structural rail component with the intention of defining a process window in terms of final part strength, surface quality, and thinning. Two process routes (isothermal forming in heated tooling and non-isothermal forming in room temperature tooling) were considered at various forming temperatures (177°C, 204°C, and 233°C). Micro hardness measurements identified peak-aged AA6013 as displaying low sensitivity (low tendency to overage) for the temperature histories considered. AA7075 T6 exhibited some strength loss (7.8%) when exposed to 177°C even for short heating times. The final part strength of the as-processed AA70XX T76 identified exposure at 204°C for 120 s as critical temperature before considerable hardness loss occurred. Due to the simple geometry of the formed rails, formability was not an issue, as was confirmed by very mild thinning in the formed part.