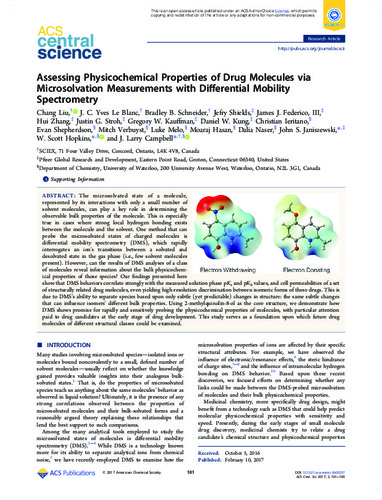 The microsolvated state of a molecule, represented by its interactions with only a small number of solvent molecules, can play a key role in determining the observable bulk properties of the molecule. This is especially true in cases where strong local hydrogen bonding exists between the molecule and the solvent. One method that can probe the microsolvated states of charged molecules is differential mobility spectrometry (DMS), which rapidly interrogates an ion’s transitions between a solvated and desolvated state in the gas phase (i.e., few solvent molecules present). However, can the results of DMS analyses of a class of molecules reveal information about the bulk physicochemical properties of those species? Our findings presented here show that DMS behaviors correlate strongly with the measured solution phase pKa and pKb values, and cell permeabilities of a set of structurally related drug molecules, even yielding high-resolution discrimination between isomeric forms of these drugs. This is due to DMS’s ability to separate species based upon only subtle (yet predictable) changes in structure: the same subtle changes that can influence isomers’ different bulk properties. Using 2-methylquinolin-8-ol as the core structure, we demonstrate how DMS shows promise for rapidly and sensitively probing the physicochemical properties of molecules, with particular attention paid to drug candidates at the early stage of drug development. This study serves as a foundation upon which future drug molecules of different structural classes could be examined.