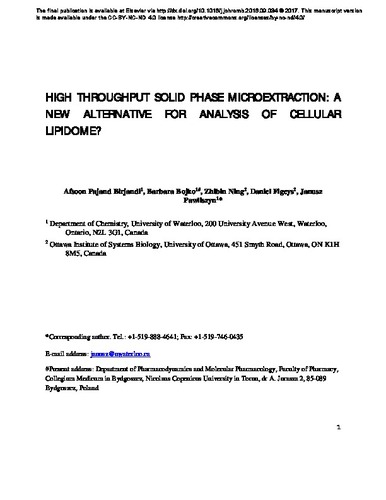 A new SPME method for untargeted lipidomic study of cell line cultures was proposed for the first time. In this study the feasibility to monitor changes in lipid profile after external stimuli was demonstrated and compared to the conventional Bligh & Dyer method. The human hepatocellular carcinoma (HCC) cell line was used as a model. The obtained results provided a list of up-regulated and down-regulated lipids through a comparison between control (non-stimulated) cells versus the group of cells treated with polyunsaturated fatty acid (20:5). Use of the SPME technique yielded a list of 77 lipid species whose concentrations were recognized to be significantly different between control and treated cells, from which 63 lipids were up-regulated in treated cells. In general, the list was comparable to the peer list obtained by the Bligh & Dyer method. However, more diversity of lipid classes and subclasses such as LPC, sphingomyelins, ceramides, and prenol lipids were observed with the application of the SPME method. Method precision for the SPME approach was within the acceptable analytical range (5-18% RSD) for all detected lipids, which was advantageous over solvent extraction applied. The evaluation of ionization efficiency indicated no matrix effect for the SPME technique, while Bligh" & Dyer presented significant ionization suppression for low abundant species such as LysoPC, PG, ceramides, and sphingomyelins, and ionization enhancement for high abundant phospholipids such as PE.