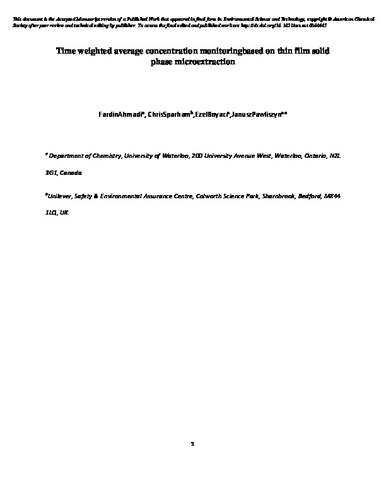 Time weighted average (TWA) passive sampling with thin film solid: phase micro extraction (TF-SPME) and liquid chromatography tandem mass spectrometry (LC-MS/MS) was used for collection, identification, and quantification of benzophenone-1, benzophenone-2, benzophenone-3, benzophenone-4, 2-phenylbenzimidazole-5-sulfonic acid, octocrylene, octylmethoxycinnamate, butylmethoxydibenzgylmethane, triclocarban and triclosan in the aquatic environment. Two types of TF-SPME passive samplers, including a retracted thin film device using a hydrophilic lipophilic balance (HLB) coating, and an open-bed configuration with an, octadecyl silica-based (C18) coating, were evaluated in an aqueous standard generation system. Laboratory calibration results indicated that the thin film retracted device using HLB coating is suitable to determine TWA concentrations of polar analytes in water, with an uptake that was linear up to 70 days. In open bed form, a one-calibrant kinetic calibration technique was accomplished by loading benzophenone3-d(5) as calibrant on the C18 coating to quantify all nonpolar compounds. The experimental results showed that the one-calibrant kinetic calibration technique can be used for determination of classes of compounds in cases where deuterated counterparts are either not available or expensive. The developed passive samplers were deployed in wastewater-dominated reaches of the Grand River (Kitchener, ON) to verify their feasibility for determination of TWA concentrations in on-site applications. Field trials, results indicated that these devices are suitable for long-term and short-term monitoring of compounds varying in polarity, such as UV blockers and biocide compounds in water, and the data were in good agreement with literature data.