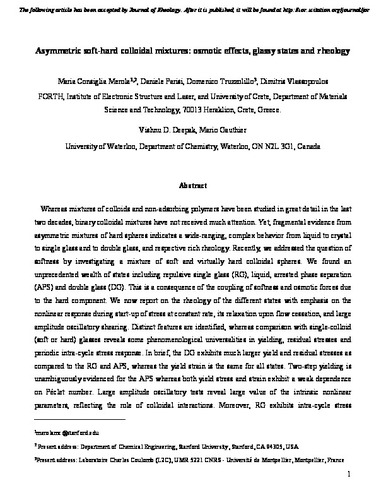 Whereas mixtures of colloids and non-adsorbing polymers have been studied in great detail in the last two decades, binary colloidal mixtures have not received much attention. Yet, fragmental evidence from asymmetric mixtures of hard spheres indicates a wide-ranging, complex behavior from liquid to crystal to single glass and to double glass, and respective rich rheology. Recently, we addressed the question of softness by investigating a mixture of soft and virtually hard colloidal spheres. We found an unprecedented wealth of states including repulsive single glass (RG), liquid, arrested phase separation (APS) and double glass (DG). This is a consequence of the coupling of softness and osmotic forces due to the hard component. We now report on the rheology of the different states with emphasis on the nonlinear response during start-up of stress at constant rate, its relaxation upon flow cessation, and large amplitude oscillatory shearing. Distinct features are identified, whereas comparison with single-colloid (soft or hard) glasses reveals some phenomenological universalities in yielding, residual stresses and periodic intra-cycle stress response. In brief, the DG exhibits much larger yield and residual stresses as compared to the RG and APS, whereas the yield strain is the same for all states. Two-step yielding is unambiguously evidenced for the APS whereas both yield stress and strain exhibit a weak dependence on Péclet number. Large amplitude oscillatory tests reveal large value of the intrinsic nonlinear parameters, reflecting the role of colloidal interactions. Moreover, RG exhibits intra-cycle stress overshoots, a feature that characterizes most of the soft glassy materials formed by interpenetrable particles and that vanishes as hard (nearly impenetrable) colloids are added in the mixtures. These results demonstrate the sensitivity of linear and nonlinear rheology to colloidal state transitions and, more importantly, the power of entropic mixing as a means to tailor the flow properties, hence performance and handling of soft composites.