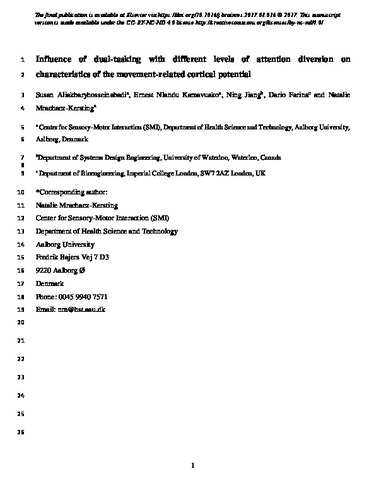 Dual tasking is defined as performing two tasks concurrently and has been shown to have a significant effect on attention directed to the performance of the main task. In this study, an attention diversion task with two different levels was administered while participants had to complete a cue-based motor task consisting of foot dorsiflexion. An auditory oddball task with two levels of complexity was implemented to divert the user’s attention. Electroencephalographic (EEG) recordings were made from nine single channels. Event-related potentials (ERPs) confirmed that the oddball task of counting a sequence of two tones decreased the auditory P300 amplitude more than the oddball task of counting one target tone among three different tones. Pre-movement features quantified from the movement-related cortical potential (MRCP) were changed significantly between single and dual-task conditions in motor and fronto-central channels. There was a significant delay in movement detection for the case of single tone counting in two motor channels only (237.1–247.4 ms). For the task of sequence counting, motor cortex and frontal channels showed a significant delay in MRCP detection (232.1–250.5 ms). This study investigated the effect of attention diversion in dual-task conditions by analysing both ERPs and MRCPs in single channels. The higher attention diversion lead to a significant reduction in specific MRCP features of the motor task. These results suggest that attention division in dual-tasking situations plays an important role in movement execution and detection. This has important implications in designing real-time brain-computer interface systems.