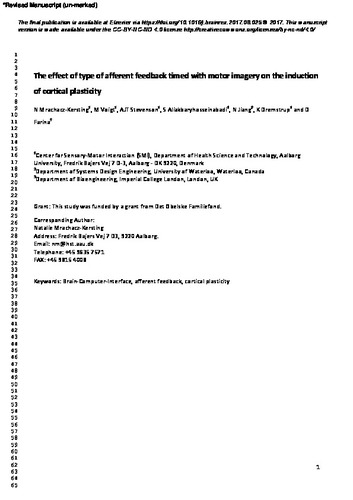 A peripherally generated afferent volley that arrives at the peak negative (PN) phase during the movement related cortical potential (MRCP) induces significant plasticity at the cortical level in healthy individuals and chronic stroke patients. Transferring this type of associative brain-computer interface (BCI) intervention into the clinical setting requires that the proprioceptive input is comparable to the techniques implemented during the rehabilitation process. These consist mainly of functional electrical stimulation (FES) and passive movement induced by an actuated orthosis. In this study, we compared these two interventions (BCIFES and BCIpassive) where the afferent input was timed to arrive at the motor cortex during the PN of the MRCP. Twelve healthy participants attended two experimental sessions. They were asked to perform 30 dorsiflexion movements timed to a cue while continuous electroencephalographic (EEG) data were collected from FP1, Fz, FC1, FC2, C3, Cz, C4, CP1, CP2, and Pz, according to the standard international 10-20 system. MRCPs were extracted and the PN time calculated. Next, participants were asked to imagine the same movement 30 times while either FES (frequency: 20 Hz, intensity: 8–35 mAmp) or a passive ankle movement (amplitude and velocity matched to a normal gait cycle) was applied such that the first afferent inflow would coincide with the PN of the MRCP. The change in the output of the primary motor cortex (M1) was quantified by applying single transcranial magnetic stimuli to the area of M1 controlling the tibialis anterior (TA) muscle and measuring the motor evoked potential (MEP). Spinal changes were assessed pre and post by eliciting the TA stretch reflex. Both BCIFES and BCIpassive led to significant increases in the excitability of the cortical projections to TA (F(2,22) = 4.44, p = 0.024) without any concomitant changes at the spinal level. These effects were still present 30 min after the cessation of both interventions. There was no significant main effect of intervention, F(1,11) = 0.38, p = 0.550, indicating that the changes in MEP occurred independently of the type of afferent inflow. An afferent volley generated from a passive movement or an electrical stimulus arrives at the somatosensory cortex at similar times. It is thus likely that the similar effects observed here are strictly due to the tight coupling in time between the afferent inflow and the PN of the MRCP. This provides further support to the associative nature of the proposed BCI system.