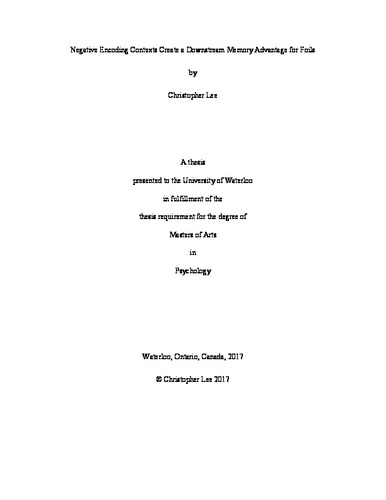 Research has suggested that during a recognition test, we re-enter the mode of processing engaged at encoding to help constrain our memory search during retrieval (Jacoby, Shimizu, Daniels, & Rhodes, 2005). A by-product of such a constrained search is that new information (such as foils, or distractors) present on that recognition test inadvertently becomes encoded and tainted with this re-activated processing mode, reaping the benefits (or costs) of the re-activated processing mode on subsequent memory tests. Other research has shown that memory performance is enhanced for information encountered within an emotional relative to a neutral context (Erk et al., 2003). This thesis examined whether, in the process of remembering information learned within an ‘emotional context’, task-irrelevant information gets encoded with that same emotional valence, resulting in enhanced later memorability. We adapted Jacoby’s (2005) memory for foils paradigm to determine whether the emotionality of the background visual context, upon which a target word was presented during encoding, influenced memory for foils on a subsequent recognition test. We also wanted to determine whether there were individual differences in the degree to which a negative or neutral visual context could influence subsequent memory for foils. Because some individuals, such those with high levels of anxiety, adopt an inherently negative mindset, this may particularly enhance memory for words overlayed on contexts that are the source of their anxiety (Coles & Heimberg, 2002; Rachman, 2004). Given this, we compared performance in individuals classified with high versus low levels of trait anxiety in Experiment 1, and high versus low fear of spiders in Experiment 2. We examined whether participants would better remember foils from a recognition test of ‘negatively-tinged’ targets, compared to ‘neutrally-tinged’ targets. In two experiments, participants studied words overlayed on either negative (negative valence IAPS pictures in Experiment 1; spider pictures in Experiment 2) or neutral (neutral valence IAPS pictures in Experiment 1; animal pictures in Experiment 2) context pictures. Following study, participants completed a recognition test (Test 1) split into 2 blocks: one for words originally overlayed on to negative pictures, one for words overlayed onto neutral contexts. A final surprise recognition test (Test 2) was then administered containing all of the foil words from each of the Test 1 test blocks. In Experiment 1, we found a significant three-way interaction on Test 2, whereby individuals with high levels of anxiety, who initially studied target words using a ‘shallow/perceptual’ encoding instruction, demonstrated significantly higher recognition accuracy for foils derived from the negative, compared to the neutral, Test 1 block. In Experiment 2, all participants demonstrated a downstream memory advantage for foils derived from the negative compared to the neutral Test 1 block. Findings suggest that emotionality of the initial encoding context can create a downstream memory bias. Results extend Jacoby’s (2005) source-constrained retrieval hypothesis, and suggest that negative encoding contexts produce a particularly salient bias for individuals with high anxiety.