I’ll Share With You But Only If… The influence of context, communication, and perspective taking on preschoolers’ social behaviours 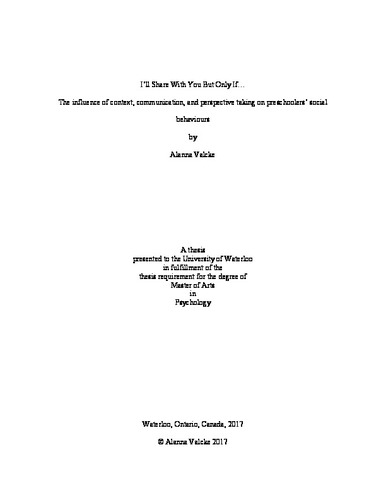 A key aspect of children’s development is learning how to navigate the social world. To do so successfully, children must be able to adapt their social behaviours to the diverse social contexts and demands that they encounter (Bierman & Welsh, 2000). The current study explored preschool-aged children’s sensitivity to cooperative and competitive social contexts, as well as their ability to flexibly adapt their sharing behaviour across the two social contexts. Furthermore, the current study examined how preschoolers modify their sharing behaviour based on social cues they receive as per communicative messages from their social partner within both contexts. Children (aged 4-6 years) completed a resource allocation task in which they determined who, between themselves and a (fictional) social partner would receive items that were important to winning a game. Participants also “interacted” with their social partners, as they were provided audio messages that conveyed whether or not their partner was willing to collaborate. The task was a 2X2 repeated measures design in which children’s sharing behaviours were evaluated as a function of the social context (cooperative vs. competitive) and the type (team-oriented vs. self-oriented). Verbal responses to social partners’ messages were also examined. Socio-cognitive skills (i.e., theory of mind and executive functioning), which are thought to facilitate children’s sharing behaviours, were also examined. Children were found to shift their behaviour according to the context (i.e., more items were shared in the cooperative context), and the extent to which they were able to do so was predicted by their theory of mind ability. Theory of mind was also a predictor of children’s sharing behaviours in cooperative contexts. Only the youngest age group (4-year-olds), were found to shift their behaviour according to message, although all participants’ verbal responses conveyed a sensitivity to message-type. Finally, executive functioning played a role in children’s sharing behaviours in response to collaborative messages from their social partners.

Alanna Valcke (2017). I’ll Share With You But Only If… The influence of context, communication, and perspective taking on preschoolers’ social behaviours. UWSpace. http://hdl.handle.net/10012/12300