Keeping it simple. Short stories written by the young generation in post-war Germany. 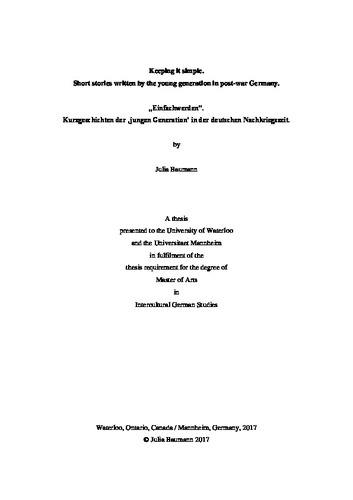 This thesis deals with selected short stories written by the so-called “young generation” in post-war Germany. To emphasize the importance of the historical, social and political background for the popularity of the short story genre in post-war Germany, the first part of this thesis will outline these connections. There follows an analysis of four well-known short stories which will concentrate primarily on the concept of ‘keeping it simple’ (Einfachwerden). As a genre, the German short story received relatively little attention before the end of World War II, but the socio-political situation between 1945 and 1950 saw a rise in its popularity. The immediate aftermath of World War II was known as the Stunde Null. The country and the people had suffered heavy losses during the war, both in infrastructure and lives. With the defeat of Nazism, even moral concepts seemed to be destroyed, and as a consequence many German writers felt the urgent need to make a fresh start in literature. They wanted to free their language from the remnants of pathos and ideology; and so these authors, called the young generation, developed a straightforward, simple and realistic style of writing. The short story turned out to be the ideal genre for German authors to tell stories about the tragic fate faced by people in the post-war era in a simple and realistic, but at the same time, forceful way. The theoretical remarks within the first part of this thesis, provide an historical background and some of the main elements of the short story genre, and will build a basis for the subsequent analysis of the four works being examined. Wolfgang Borchert, Wolfdietrich Schnurre and Heinrich Böll are numbered among the most popular authors of the German post-war era. Their personal ideals and beliefs will be outlined to gain a deeper understanding of their literary texts. The analysis of Die Küchenuhr and Das Brot (Wolfgang Borchert), Auf der Flucht (Wolfdietrich Schnurre) and Wanderer, kommst du nach Spa… (Heinrich Böll) will establish that the authors found different ways to implement the concept of ‘keeping it simple’ and the theoretical beliefs of a fresh start in literature. To this day, these works play a significant role in documenting and reinforcing the struggles people had to face during the post-war era, and also the ideals, beliefs and values that kept them going.