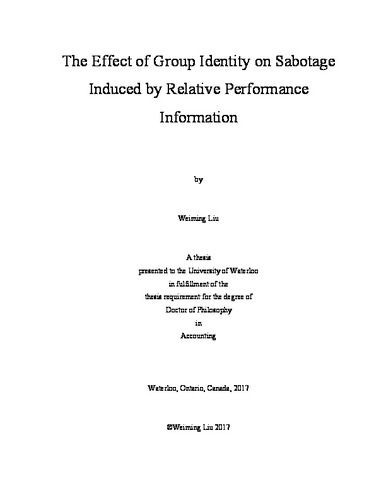 Organizations commonly provide relative performance information (RPI) as part of their management control systems to motivate employees. Despite the benefits of RPI that have been well-documented in the literature, RPI can lead to unhealthy competition where employees sabotage their co-workers’ performance so as to outperform, and thus be ranked higher than their co-workers. Organizations could strengthen group identity, an informal management control, to reduce sabotage. However, there is limited previous evidence that strengthening group identity actually reduces sabotage. This study aims to fill that gap. Additionally, this study investigates whether the effect of strengthening group identity depends on the type of compensation contract assigned. I used an experiment in a laboratory setting because it is difficult to observe incidences of employee sabotage behavior in real organizations since sabotage is often conducted covertly and concealed carefully. I manipulate compensation type at two levels (piece rate versus flat wage), and group identity at two levels (strong versus moderate). Both sabotage and effort are measured as dependent variables. I find evidence that strengthening group identity increase sabotage. In addition, I predict and find that employees sabotage co-workers to a greater extent under a piece-rate contract than under a flat wage contract. However, my results do not support the arguments that the effect of strengthening group identity on sabotage depends on compensation type. In addition, although I find that suspicion of having been sabotaged by others increases the frequency at which employees sabotage others, I find mixed evidence on whether the suspicion of having been sabotaged affects employees’ effort.