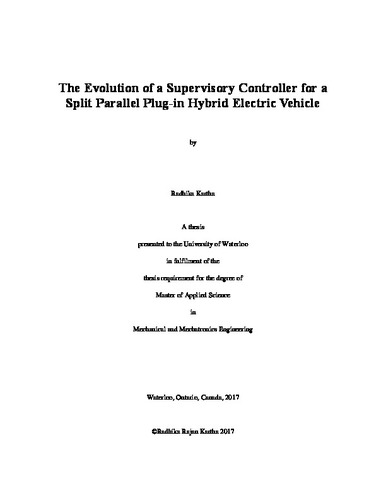 The growing global acceptance of alternative fuels and electrified vehicles, accelerated by stricter emission rules, has accentuated the demand for more engineers who are adept in advanced vehicle technologies, particularly in the field of hybrid electric vehicles. Through the EcoCAR 3 challenge, the University of Waterloo Alternative Fuels Team (UWAFT) has the opportunity to produce a split parallel plug-in hybrid electric vehicle (PHEV) that runs on an alternative fuel that has 85% ethanol and 15% gasoline (E85). With the avant-garde design of a snowmobile engine (850cc turbocharged, two-cylinder) with pre and post transmission motors and an 8-speed automatic transmission, there is a need to build an equally innovative hybrid supervisory controller (HSC). This research focuses on the process followed to build pragmatic controls for its HSC that aims to optimise vehicle performance while ensuring safe operation, lowering emissions, and maximising fuel economy. The question of how an HSC built in a student team environment, which transitions through various drive modes, can ensure safety coverage has not yet been sufficiently addressed. Along with documentation that has traceability between requirements and testing of the HSC code, UWAFT’s HSC is intelligently structured for manageability, serviceability and ultimately safety. This investigation starts with methodologies adopted to ascertain traceability between requirements developed and testing done for validation and verification of the developed HSC code for automotive safety. UWAFT’s HSC is a rule-based controller developed through model-based design. Following regression testing in various environments such as SIL and HIL, the integrated HSC code is then tested in vehicle. For the integrated code to be cohesive, the rules for code partitioning to maintain its readability and how the model is managed are discussed. The preliminary results of the HSC code prove its practicality by showing effective transitions and torque splitting. Thus, by providing an HSC with incorporated safety and intelligent structure for rapid code development, a new benchmark is set for HSC developed within student team environments.