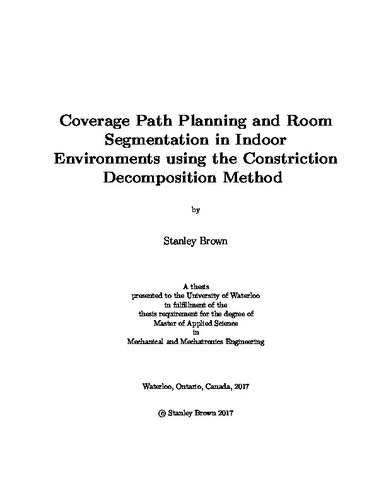 The task of complete coverage path planning in complex 2D environments is a classic NP- Hard problem that has been an active research topic for well over 30 years. A common approach to solving coverage problem in such environments is to partition, or segment, the target environment into a set of cells that have some property that allows any given cell to be covered in an optimal or near optimal manner. If each cell of an environment is visited and covered by some agent, then the entire environment is said to be covered. This work proposes a novel segmentation method, called the Constriction Decomposition Method (CDM), that works by locating constriction points in indoor, 2D environment and then partitioning the environment based on the constriction points. When the CDM is applied to 2D maps of office or laboratory environments, the CDM produces a segmentation that closely resembles a room based decomposition. Once the environment has been decomposed into regions, this work demonstrates that each room can be covered using a simple coverage path planning algorithm that exploits the fact that the resulting cells do not contain any constriction points. The lack of constriction points in each region means that each region, or room, can be completely covered using a series of contour following paths followed by a series of back and forth motions. Once a set of coverage paths are pro- duced for each cell, a tour between all path is found using a heuristic Traveling Salesman Problem (TSP) solver. The proposed segmentation and coverage path planning methods are tested on a set of 15 indoor environments that are derived from a set of floor plans corresponding to five office and seven laboratory environments. The quality of the segmentation produced by the CDM is directly compared to existing methods on a qualitative and quantitative basis using a series of metrics proposed by other authors. The set of coverage paths for each environment are compared to existing work based on the ratio between the total path length and the ratio between the inter-sector path and the total coverage path length. Based on these metrics it is demonstrated that the CDM and the CDM coverage path planner produces both superior segmentations and coverage plans in 2D indoor environments.