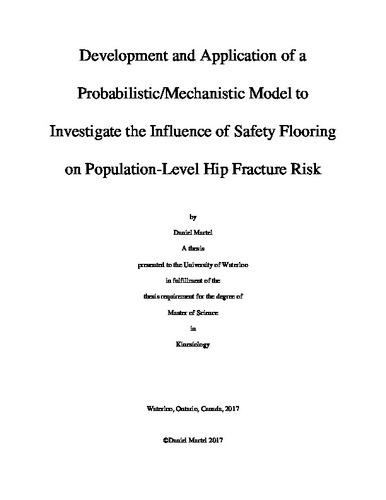 Hip fractures are a devastating injury in the older adult population. They are almost exclusively sustained during a fall-related event, with lateral falls resulting in an impact to the proximal femur most highly associated with fracture risk. The health consequences of hip fractures, as well as their large associated costs, have led to extensive research on this topic. Of particular interest is the prediction of hip fractures. While certain mechanical factors, such as impact force and bone strength, are directly related with fracture outcomes during a lateral fall to the hip, many clinical tools or models used to predict risk of hip fracture (such as FRAX) do not explicitly incorporate these mechanical aspects into their predictions. Furthermore, these models do not lend themselves well to population-level analysis, as they require variables that are specific to each assessed individual. A population-level model could provide insight into the population-level risk of fall-related hip fracture risk, as well as explore the effectiveness of population-level interventions in a virtual environment. Accordingly, the primary goal of this thesis project was to develop a mechanistically based probabilistic model of population-level hip fracture risk for Canadian older adults. The model generated virtual individuals (VI), to whom certain physical characteristics were pseudo-randomly assigned. These physical characteristics were used as inputs into algorithms used to estimate impact force and bone strength. Factor of Risk (FOR) was calculated as the ratio between impact force and bone strength, and used as a metric of hip fracture risk. The model was pseudo-validated by replicating groups of VI representing the 4 samples reported in Dufour et al, 2012; the model estimated group mean FOR within 0.05 of those reported in the article. To estimate the population-level risk of fall-related hip fracture in the Canadian older adults, the model was run with a sample of 100 000 VI; the model estimates were characterized as distributions of FOR for both males and females, with the mean (SD) FOR being 0.067 (0.34) for females and 0.422 (0.23) for males. The secondary goal of this thesis project was to develop a safety flooring intervention module, and implement it into the probabilistic model in order to estimate the influence of a population wide safety flooring intervention on hip fracture risk. A mechanical testing experiment was conducted to investigate the effects of fall and faller-specific factors (impact velocity, effective mass, TSTT, and pelvic stiffness) on the force attenuation provided by a SmartCells™ safety floor. Regression analyses revealed significant main effects (p < 0.05) for fall factors, as well as several interaction effects. The results of the analysis were used to generate a predictive equation for safety flooring force attenuation. The model was modified to include the predictive equation as a safety floor force attenuation module (or sub-model), calculating intervened net force (subtracting the predicted safety flooring force attenuation from the net force) and computing the Intervened Factor of Risk (IFOR) from the ratio of intervened net force and bone strength. The modified model was run with a sample of 100 000 VI, computing both FOR and IFOR for each VI, and found that the safety flooring intervention lead to a 0.0231 (34.6%) decrease in mean IFOR from FOR, and a 0.1215 (28.8%) decrease for males. These findings suggest that a safety floor intervention can lead to a marked reduction in fall-related hip fracture risk for Canadian older adults. This thesis presents insight into the use of probabilistic methods for estimating population-level hip fracture risk, as well as provide an interesting example of virtually testing the effectiveness of an intervention on population-level hip fracture risk.

Daniel Martel (2017). Development and Application of a Probabilistic/Mechanistic Model to Investigate the Influence of Safety Flooring on Population-Level Hip Fracture Risk. UWSpace. http://hdl.handle.net/10012/12239