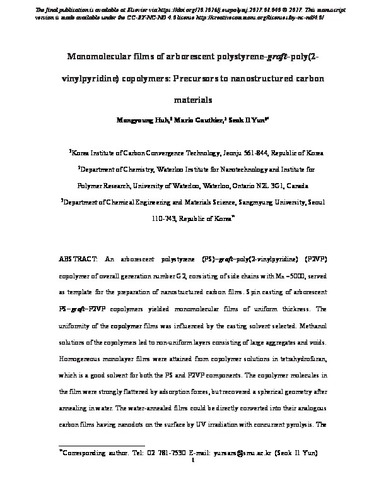 An arborescent polystyrene (PS)−graft−poly(2-vinylpyridine) (P2VP) copolymer of overall generation number G2, consisting of side chains with Mn ∼5000, served as template for the preparation of nanostructured carbon films. Spin casting of arborescent PS−graft−P2VP copolymers yielded monomolecular films of uniform thickness. The uniformity of the copolymer films was influenced by the casting solvent selected. Methanol solutions of the copolymers led to non-uniform layers consisting of large aggregates and voids. Homogeneous monolayer films were attained from copolymer solutions in tetrahydrofuran, which is a good solvent for both the PS and P2VP components. The copolymer molecules in the film were strongly flattened by adsorption forces, but recovered a spherical geometry after annealing in water. The water-annealed films could be directly converted into their analogous carbon films having nanodots on the surface by UV irradiation with concurrent pyrolysis. The pyrolyzed nanomaterials exhibited the characteristics of partially graphitic carbon with nitrogen.