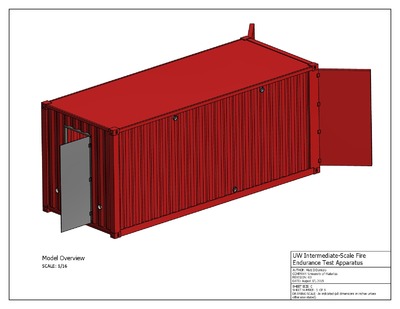 Fire separations in a building (e.g. walls) are often constructed from combustible materials; those containing wood stud framing, mineral wool insulation, and gypsum board wallcoverings are commonplace in Canadian residential buildings. These construction assemblies degrade under fire exposure, a process involving chemical decomposition as well as physical damage. A fire separation's ability to resist the spread of fire is traditionally assessed by means of a fire resistance test, in which a construction assembly is exposed to an intense furnace fire under prescribed conditions. This method of assessment, while standardized and prescribed in the National Building Code of Canada, can be restrictive to the design process. In contrast, a performance-based approach, in which the adequacy of a fire separation is assessed on the basis of its real-world use, can lead to designs with improved safety, efficiency, and flexibility. Such a design approach requires a specific engineering toolset: models capable of predicting the thermal degradation of construction assemblies under specified fire conditions. Development of the next generation of thermal degradation models requires detailed study of the phenomena occurring at the large-scale, in the context of real fires rather than prescribed exposure conditions, and a controlled means by which to conduct this type of study. Also, a diverse set of experimental data is required for the validation of such models. The objective of the present body of work is to develop a novel large-scale experiment tailored specifically for the study of thermal degradation of construction assemblies in real fires, and to demonstrate the utility of the experimental procedure as applied to the detailed study of thermal degradation phenomena. A selection of relevant experimental techniques were identified, and a new apparatus and method of test were developed for this stated purpose. In this new experiment, one wall of a fire compartment was instrumented and monitored as it was subject to a realistic fire exposure. A novel method for measurement of incident heat flux to a large area in a fire compartment was developed, and used to characterize the conditions of the experiment for a wood crib fire. A series tests were conducted on fire resisting compartment partitions that are used in residential buildings in Canada. In the tests, thermal degradation phenomena were observed and assessed relative to temperatures measured in the degrading walls. The utility of this new approach in the experimental study of thermal degradation of construction assemblies subject to real fire exposures was demonstrated. Furthermore, a relevant set of experimental data was generated that may be used for validation of future models of thermal degradation and integrated fire analysis.