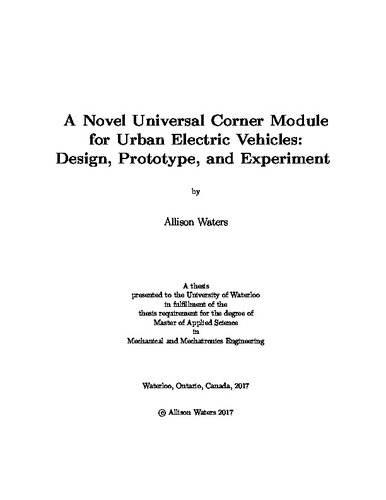 This thesis presents the work of creating and validating a novel corner module for a three-wheeled urban electric vehicle in the tadpole configuration. As the urban population increases, there will be a growing need for compact, personal transportation. While urban electric vehicles are compact, they are inherently less stable when negotiating a turn, and they leave little space for passengers, cargo and crash structures. Corner modules provide an effective solution to increase the space in the cabin and increase the handling capabilities of the vehicle. Many corner module designs have been produced in the hopes of increasing the cabin space and improving the road holding capabilities of the wheel. However, none have been used to increase the turning stability of the vehicle via an active camber mechanism while remaining in an acceptable packaging space. Active camber mechanisms are also not a new concept, but they have not been implemented in a narrow packaging space with relatively large camber angle. Parallel mechanism research and vehicle dynamics theory were combined to generate and analyse this new corner module design. The corner module increases the stability of the urban electric vehicle by cambering the front wheels to -15 degrees when the vehicle is turning. The camber angle augmentation increases the track width which subsequently decreases the center of gravity height. These changes accumulated to increase the stability of the vehicle. The corner module uses two actuators to control the orientation of the wheel. Bias ply tires are incorporated into the corner module to enable the large camber angles. To increase the space in the cabin, the front left and right wheels are not connected by a mechanical linkage, and the motors are mounted to the wheel rim. While disc brakes are integrated into the corner module, the motor is also capable of regenerative braking. By integrating this corner module into urban electric vehicles, the vehicle size and pollution can be reduced while increasing the cabin space and public space.