Shakespeare Adaptations in a Canadian Context and the Question of Canadian Identity. 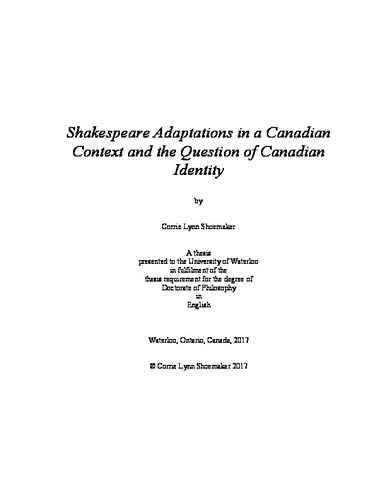 The doctoral thesis, Shakespeare Adaptations in a Canadian Context and the Question of Canadian Identity examines the representation, production and interpretation of Canadian identity through Shakespeare’s plays at two world renown Canadian Shakespearean Festivals: Ontario’s Stratford Festival of Canada and British Columbia’s Bard on the Beach. Using performance criticism and theatre studies the dissertation analyzes both festivals for their modern representation and adaptations of Shakespeare on the provincial and national Canadian stage. By studying the last ten years of both festivals, it provides a record of the Canadian identity turn on the stage, noting how specific provincial location, festival history and current events affect and alter perceived notions of Canadian identity, audience criticism and theatre production. Using archival research, cast and crew interviews, and on site observations the dissertation analyzes the point of negotiation between local and universal in four festival productions and will engage with the broader dialogue on nationality. The dissertation examines the representation of Canadian identity on the stage through a provincial lens while also providing a hitherto unrecorded history of Bard on the Beach in comparison with the Stratford Festival. The four productions analyzed include a repeat production of Miles Potter’s The Taming of the Shrew first performed at Stratford in 2003 and later at Bard in 2007, Bard’s 1950’s Windsor Ontario inspired The Merry Wives of Windsor presented in 2012, Stratford’s 2012 Henry V and Stratford’s 2006 first all black premier of Afro-Canadian playwright Djanet Sears’ Harlem Duet.