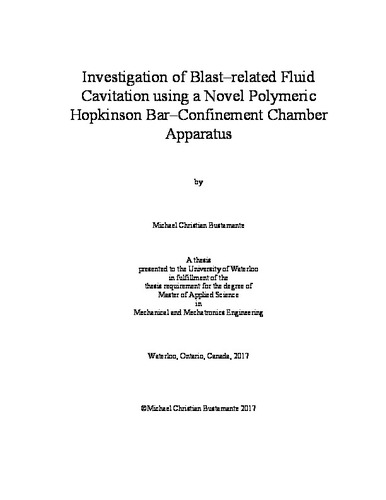 Mild Traumatic Brain Injury (mTBI) associated with blast exposure has become an increasing issue in military conflicts, with the most common exposure being improvised explosive devices. Exposure to blast accounted for 81% of all casualties reported for Operation Enduring Freedom and Operation Iraqi Freedom combined. It has been identified as the ‘signature injury’ of the military conflicts in Iraq and Afghanistan, and has been reported to be strongly associated with higher rates of Post–Traumatic Stress Disorder (PTSD), depression, and physical health problems than with other injuries [1]. An observation common to most head blast exposure studies is the negative intracranial pressure occurring at the opposite site of initial blast wave transmission. This observation resulted in the hypothesis of intracranial cavitation of cerebrospinal fluid (CSF), due to the negative pressures generated, as a potential brain injury mechanism. The purpose of this work was to develop an apparatus that generates controlled localized cavitation with similar loading encountered in head blast exposure to measure the cavitation pressure thresholds of fluids. Existing dynamic methods of generating cavitation presented limited loading capabilities, boundaries, and were not suitable for testing of biological fluids, such as CSF. Three iterations of the apparatus were developed, and the limitations identified were, potential cavitation nuclei and leakage at the seals and pressure gauge, variability in generated loading, and generation of diffuse cavitation. Due to the nuclei from the pressure gauge implementation, a validated numerical model of the apparatus was used to predict the negative fluid pressure in the chamber. The final proposed design for the apparatus incorporated a novel closed cavitation chamber to generate localized cavitation resulting from a reflected compression pulse, which was generated by a spherical steel striker and Polymethyl methacrylate (PMMA) incident bar. Numerical models were developed and validated to model the PMMA incident bar with and without the PMMA chamber using 24 independent tests for strain and end velocity using iv varying striker geometry (cross–correlation: 0.970–0.997). Additionally, the numerical model of the apparatus including the chamber was developed and validated with 27 independent tests for strain and chamber end surface velocity (cross–correlation: 0.921). Cavitation tests on distilled water were performed and a 50% probability of cavitation was measured at a negative pressure of 3.39 MPa ±2%, comparable to values found in the literature. Analysis of the experimental and numerical result trends demonstrated comparable chamber strain (R2: 0.875) and chamber end surface velocity (R2: 0.992). The predicted fluid pressures from the model were verified with a first–order approximation showing good agreement (R2: 0.892). This novel apparatus, incorporating a closed confinement chamber integrated with a polymeric SHPB apparatus, was able to create localized fluid cavitation using a reflected compression wave, with loading comparable to blast exposure. Future studies will investigate the measurement of CSF cavitation pressure and incorporation of the results in computational head-blast models.