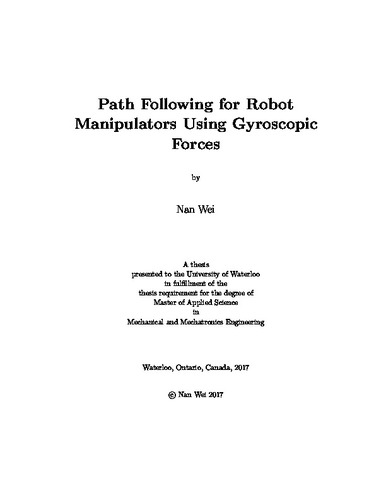 This thesis deals with the path following problem the objective of which is to make the end effector of a robot manipulator trace a desired path while maintaining a desired orientation. The fact that the pose of the end effector is described in the task space while the control inputs are in the joint space presents difficulties to the movement coordination. Typically, one needs to perform inverse kinematics in path planning and inverse dynamics in movement execution. However, the former can be ill-posed in the presence of redundancy and singularities, and the latter relies on accurate models of the manipulator system which are often difficult to obtain. This thesis presents an alternative control scheme that is directly formulated in the task space and is free of inverse transformations. As a result, it is especially suitable for operations in a dynamic environment that may require online adjustment of the task objective. The proposed strategy uses the transpose Jacobian control (or potential energy shaping) as the base controller to ensure the convergence of the end effector pose, and adds a gyroscopic force to steer the motion. Gyroscopic forces are a special type of force that does not change the mechanical energy of the system, so its addition to the base controller does not affect the stability of the controlled mechanical system. In this thesis, we emphasize the fact that the gyroscopic force can be effectively used to control the pose of the end effector during motion. We start with the case where only the position of the end effector is of interest, and extend the technique to the control over both position and orientation. Simulation and experimental results using planar manipulators as well as anthropomorphic arms are presented to verify the effectiveness of the proposed controller.