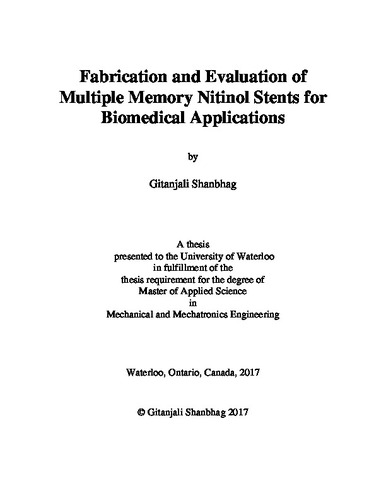 Cardiovascular diseases (CVD) are the leading cause of deaths worldwide. The development of stents led to a revolutionary phase in the treatment of these diseases [1]. A stent is a tubular metallic structure that is implanted within an artery during an angioplasty procedure to give on-going support in the form of scaffolding to maintain blood vessel patency [2]. The unique properties of nitinol such as pseudoelasticity, shape memory, excellent biocompatibility, and corrosion resistance, make it a highly desirable material for fabrication of stents. The superelastic properties of nitinol stents allow good self-expansion ratio and uniform radial expansion with less longitudinal shortening. These properties promote the use of nitinol for stenting through the development of self-expanding stents [3]–[9]. Conventional fabrication processes for NiTi stents limit their performance since only a constant pseudoelastic (PE) force can be achieved along the length. However biological systems rarely have constant forces (i.e. radial), hence variable PE force would allow the design and fabrication of a more compatible device. This work focusses on locally modifying the pseudoelasticity of NiTi stents to enable conformity to the surrounding biological system. This was achieved through the application of a high-power density laser that locally modifies the microstructure for predetermined locations along the tube. Subsequently, it was found that the laser processed tube exhibited altered PE properties as compared to the original base material. The mechanism behind this pseudoelastic force modification is the effect of the replacement of a portion of the base metal by a series of laser processed zones. Three-point bend tests, tensile tests and stent crush tests were carried out to demonstrate the localized control and customization of the stent’s thermomechanical properties. Finally, the laser processed stents were fabricated and evaluated both thermally and mechanically and compared to a base material stent. Although more work is needed to understand the exact deformation mechanisms, this method offers precise pseudoelastic force tuning for stents by changing the material properties, which, until now has not been possible. There does not yet exist a stent that has ideal properties that would make its use optimal for all cases. Every design influences the blood-stent interactions differently [10].