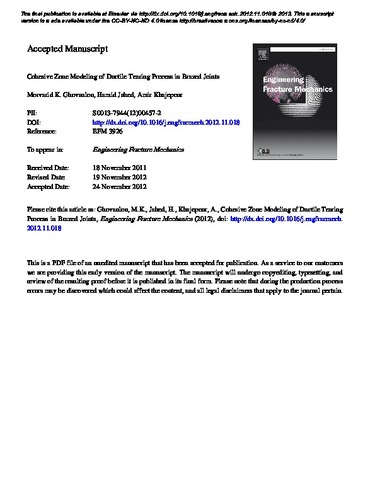 Ductile tearing process in low carbon steel brazed joints with copper filler metal is studied using the Cohesive Zone Model. The Cohesive Zone Model is characterized by two parameters related to the cohesive strength and cohesive energy. A new method is developed to estimate the Cohesive Zone Model parameters through direct experimental measurements and numerical modeling. The cohesive energy of the brazed joints is obtained from the fracture test results performed on the single-edge notched bend specimens. Based on the obtained cohesive energy parameter, the fracture test is simulated using a cohesive zone finite element model. A unique value for the joint cohesive strength is determined by best fitting the finite element results to the experimental load-crack mouth opening displacement curves. The merit of the characterized Cohesive Zone Model is explored by finite element modeling of the tensile test performed on the single-edge notched tension specimens. The load-crack mouth opening displacement curve obtained from the finite element modeling conforms to the corresponding tensile test results. Furthermore, the effect of the crack tip stress constraint on the plastic zone shape and size is successfully captured by the model. The good agreement between the finite element simulation results and the experimental data demonstrates the applicability of the Cohesive Zone Model for fracture analysis of the brazed joints.