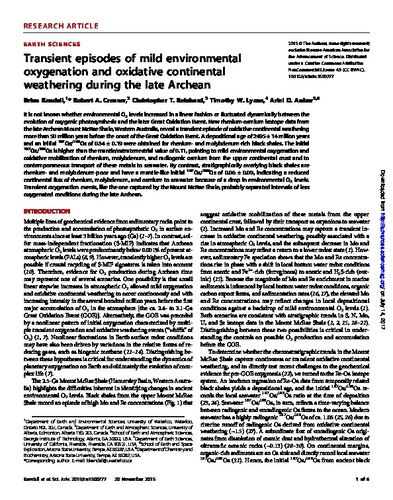 It is not known whether environmental O2 levels increased in a linear fashion or fluctuated dynamically between the evolution of oxygenic photosynthesis and the later Great Oxidation Event. New rhenium-osmium isotope data from the late Archean Mount McRae Shale, Western Australia, reveal a transient episode of oxidative continental weathering more than 50 million years before the onset of the Great Oxidation Event. A depositional age of 2495 ± 14 million years and an initial (187)Os/(188)Os of 0.34 ± 0.19 were obtained for rhenium- and molybdenum-rich black shales. The initial (187)Os/(188)Os is higher than the mantle/extraterrestrial value of 0.11, pointing to mild environmental oxygenation and oxidative mobilization of rhenium, molybdenum, and radiogenic osmium from the upper continental crust and to contemporaneous transport of these metals to seawater. By contrast, stratigraphically overlying black shales are rhenium- and molybdenum-poor and have a mantle-like initial (187)Os/(188)Os of 0.06 ± 0.09, indicating a reduced continental flux of rhenium, molybdenum, and osmium to seawater because of a drop in environmental O2 levels. Transient oxygenation events, like the one captured by the Mount McRae Shale, probably separated intervals of less oxygenated conditions during the late Archean.