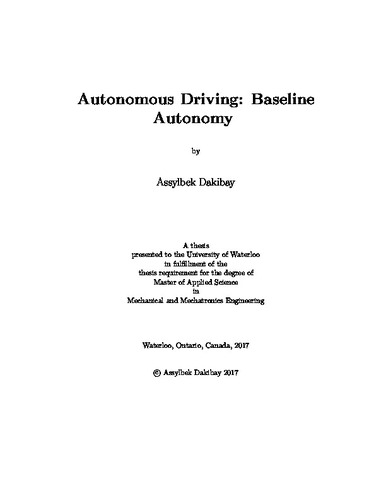 In near future Autonomous driving will affect every aspect of transportation and offer a significant boost in mobility for everyone. Autonomous driving techniques and modules must be chosen according to the task the platform is developed for. Slow speed driving on campus or highway driving in poor weather conditions, may require different sets of sensors, vehicle models and as a result different software architecture. Some of the main modules that an autonomous driving system needs are the vehicle state estimator and vehicle controller. The development of these two modules relies heavily on the robustness of the vehicle model chosen and the task at hand. University of Waterloo decided to join the Autonomous Driving research by partici- pating in the project, which required development and implementation of the autonomous driving demo sequence for Consumer Electronics Show in 2017. Since the demo sequence was to be performed at slow speeds and, because certain vehicle parameters were not available at the time, a kinematic vehicle model was used in implementation of the core autonomous driving modules: state estimation and control. These modules are imple- mented on a full scale autonomous driving platform and were designed based on the needs and requirements of the demo sequence. The implementation results show that the cho- sen vehicle model enables the state estimator to fuse incoming sensor data and allows the controller to track the desired path and velocity profile. For further deployment of the autonomous driving platform for research in urban and highway driving an aggressive driving framework was proposed that is based on dynamic vehicle model and incorporates the tire forces in the generation of the speed profile and keeps the vehicle at the limits of adhesion. The aggressive driving controller can be utilized for emergency evasive maneuvers at low road friction conditions. The controller was tested on a high fidelity simulation software for a double lane change emergency maneuver. The results showed that the aggressive driving framework proposed can be successfully incor- porated into the autonomous driving architecture and can perform position and velocity tracking at maximum possible speed.