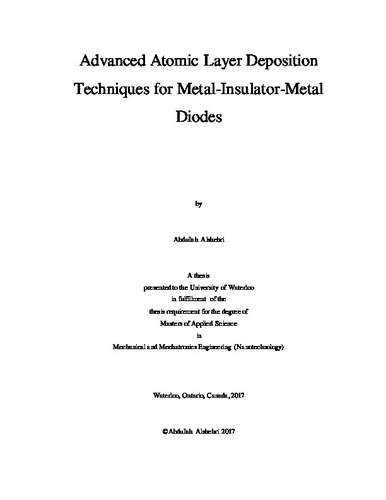 Metal-Insulator-Metal (MIM) diodes are nanoelectronic devices that operate by quantum tunneling of electrons through a thin dielectric layer to rectify high frequency alternating current (AC) to usable direct current (DC). In this research, two fabrication techniques are explored to improve the MIM diode fabrication process; the introduction of a thickness gradient and doping of the insulator layer. Atmospheric pressure spatial atomic layer deposition (AP-SALD) is used for the first time for the combinatorial fabrication of MIM diodes. This unique technique is used to deposit thin dielectric films with a thickness gradient. A plasma-assisted atomic layer deposition (PAALD) technique is utilized for deposition of nitrogen-doped TiO2 films. Tuning the electron affinity (χ) of the insulator by doping is expected to improve the rectification of the diode. Pt-Al2O3-Al diodes have been fabricated by AP-SALD to demonstrate the capability of this method for rapid, scalable and atmospheric insulator layer deposition. Current-voltage measurements of these diodes exhibit high asymmetry and nonlinearity. In addition, AP-SALD was implemented to fabricate combinatorial and high-throughput Pl-Al2O3-Al diodes via the introduction of an Al2O3 thickness gradient. Current-voltage characteristics and figures of merit (FOM) for the MIM diodes show variations with the thickness gradient of the Al2O3 insulator. A plasma assisted atomic layer deposition (PAALD) system was used to deposit nitrogen-doped titanium dioxide. A simple approach was developed that requires only a nitrogen plasma and short plasma exposure times to effectively dope TiO2. A range of nitrogen dopant concentrations were achieved by varying the flow rate and exposure times of nitrogen and oxygen plasmas. A nitrogen content as high as 27.2±0.5 at. % was observed when only the nitrogen plasma was used. The type of nitrogen doping can be varied from purely substitutional to entirely interstitial, as measured by X-ray photoelectron spectroscopy (XPS). UV-Visible spectroscopy measurements showed a shifting in the absorption edge from 350 to 520nm with doping, indicating band gap narrowing from 3.1eV to 1.8eV.