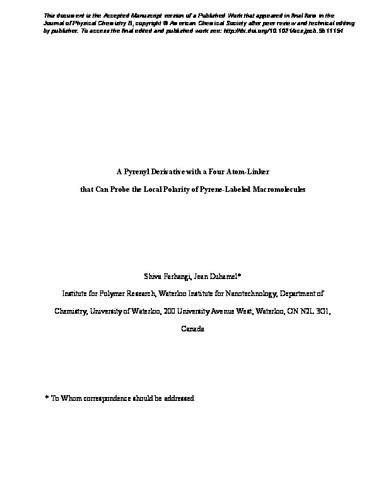 The fluorescent probe 1-pyrenemethoxyethanol (PyMeEGOH) was designed to replace commercially available 1-pyrenebutanol (PyButOH) as an alternative fluorescent label to probe the internal dynamics and interior polarity of macromolecules by steady-state and time-resolved fluorescence. While excimer formation and sensitivity to solvent polarity are two well-recognized properties of pyrene, much less known is that these properties are often mutually exclusive when a 1-pyrenebutyl derivative is used to prepare pyrene-labeled macromolecules (PyLMs). As the sensitivity of pyrene to solvent polarity is a result of its symmetry, attaching a butyl group to pyrene breaks the symmetry of pyrene, so that the 1-pyrenebutyl derivatives are much less sensitive to the polarity of their environment compared to unmodified pyrene. This report demonstrates that replacement of a methylene group in the β-position of PyButOH by an oxygen atom, such as in PyMeEGOH, restores the sensitivity of this pyrene derivative to the polarity of its local environment to the same level as that of molecular pyrene without impeding pyrene excimer formation upon incorporation into PyLMs.