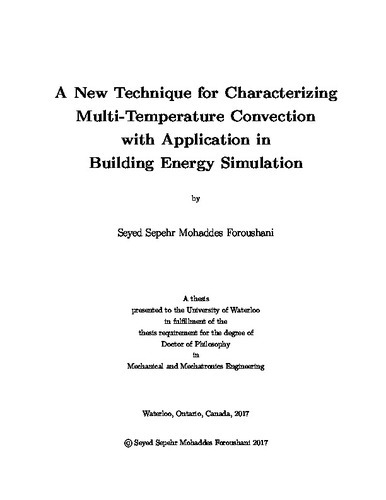 Glazing systems with attachments such as shades and insect screens are known as complex fenestration systems (CFS). The ASHRAE Window Attachment Tool (ASHWAT) for modeling heat transfer through a CFS are based on a general network of thermal resistors. In these models, convective heat transfer at the indoor side of a CFS with an indoor-mounted attachment is represented by a delta resistor-network. The heat transfer coefficients that characterize this network cannot be calculated using the conventional methods, i.e. based only on the knowledge of the total heat transfer rates at the temperature nodes. Currently, approximate relations based on known limits and experience are used in ASHWAT to estimate the indoor-side convection coefficients. The CFS problem is part of the broader class of multi-temperature convection, i.e. problems entailing exclusively isothermal and adiabatic boundary conditions. Driven by the desire to calculate the convection coefficients of the CFS problem with improved accuracy, this thesis is devoted to the study of multi-temperature convection. An extension of the Newton law of cooling is proposed to formulate the multi-temperature convection problem in terms of multiple driving temperature differences. Consequently, the problem is characterized by multiple paired heat transfer coefficients. A technique dubbed dQdT was developed to obtain the paired heat transfer coefficients. The dQdT technique is based on a baseline solution to the full set of governing equations and subsequent solutions to the linearized energy equation with perturbed boundary conditions. dQdT can be implemented in both analytical and numerical solutions. In addition to enabling the extended Newton formulation, the dQdT technique provides a basis for determining the applicability of the resistor-network model to a convection problem. The validity of dQdT was demonstrated in several ways. The extended Newton formulation and the dQdT technique were applied to a wide range of convection problems: forced and free convection, internal and external flows, laminar and turbulent flows, hydrodynamically developed and hydrodynamically developing flows, constant- and variable-property flows. The extended Newton formulation was shown to be advantageous compared to the traditional formulation; it leads to a presentation of the solution that is more consistent with the physics of the problem while revealing more detail about the thermal phenomenon. Moreover, using the dQdT results improved correlations for the classical problems of convection in heated annuli and vertical channels were developed. Finally, the dQdT technique was applied to calculate the heat transfer coefficients of the CFS problem. It was shown that while the current ASHWAT estimates are in good agreement with the dQdT results for a CFS entailing a roller blind, there is a potential for improving the ASHWAT estimates for a CFS entailing a venetian blind. Using dQdT, the convection coefficients of a wide range of CFS configurations can now be accurately calculated.