The effects of Eriophorum vaginatum on N2O fluxes at a restored, extracted peatland 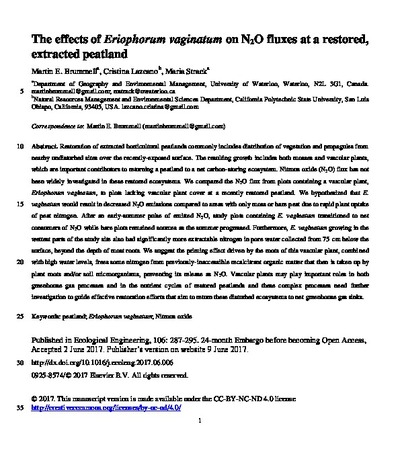 Restoration of extracted horticultural peatlands commonly includes distribution of vegetation and propagules from 10 nearby undisturbed sites over the recently-exposed surface. The resulting growth includes both mosses and vascular plants, which are important contributors to returning a peatland to a net carbon-storing ecosystem. Nitrous oxide (N2O) flux has not been widely investigated in these restored ecosystems. We compared the N2O flux from plots containing a vascular plant, Eriophorum vaginatum, to plots lacking vascular plant cover at a recently restored peatland. We hypothesized that E. vaginatum would result in decreased N2O emissions compared to areas with only moss or bare peat due to rapid plant uptake 15 of peat nitrogen. After an early-summer pulse of emitted N2O, study plots containing E. vaginatum transitioned to net consumers of N2O while bare plots remained sources as the summer progressed. Furthermore, E. vaginatum growing in the wettest parts of the study site also had significantly more extractable nitrogen in pore water collected from 75 cm below the surface, beyond the depth of most roots. We suggest the priming effect driven by the roots of this vascular plant, combined with high water levels, frees some nitrogen from previously-inaccessible recalcitrant organic matter that then is taken up by 20 plant roots and/or soil microorganisms, preventing its release as N2O. Vascular plants may play important roles in both greenhouse gas processes and in the nutrient cycles of restored peatlands and these complex processes need further investigation to guide effective restoration efforts that aim to return these disturbed ecosystems to net greenhouse gas sinks.