A Finite Element Investigation of Possible Mechanisms of Luminal Cell Escape from the Mammary Duct: An Initial Step in Breast Cancer Metastasis 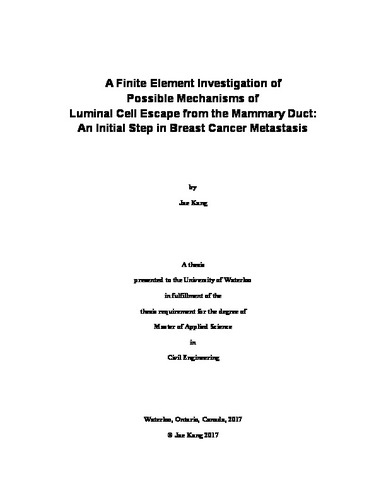 Cancer is an illness that kills some ten million people every year, and as cancer rates increase, a cure for metastatic disease is more necessary than ever. Breast cancer is the most common form of malignancy in the female population, with 1 in 8 women developing invasive ductal carcinoma (IDC) in their lifetime. The majority of cancer deaths are caused by metastasis, a process in which cancer cells spread throughout the body and invade multiple vital organs as a result of increased motility. Cell biomechanics is a nascent field in oncology, and it investigates cell movement and rearrangement in terms of mechanical forces and deformations. The Differential Interfacial Tension Hypothesis (DITH) provides a way to calculate the net tensions that subcellular components generate along cell boundaries and that give rise to deformation and rearrangement of individual cells and groups of cells. Finite element (FE) software can be used to model these forces and their interactions with each other. To date, this approach has made it possible to study a wide range of morphological phenomena, including wound healing, organ development and metastatic cell migration. The goal of this study was to use this software to investigate the escape of a single luminal epithelial (LE) cell from a mammary duct – the first stage of breast cancer metastasis. Mechanisms that were considered include: modified interfacial tensions (MIT), protrusions (P) and tension gradients (TG). The simulations showed that escape of a metastatic LE cell involves two consecutive stages – detachment from the mammary duct and migration through the extracellular matrix. The simulations showed that MIT alone can produce LE cell detachment, while protrusions alone or tension gradients alone can produce migration of cells through the ECM; Mechanisms can act in concert to speed escape and migration, and no single mechanism is able to produce both escape and migration. The simulations reflect behaviours seen in experiments in organoids and other in vitro systems, adding support for the simulation findings. Hopefully, the insights provided by this study will help lead to better understanding of the mechanics of cancer cell escape and migration, and to improved strategies for metastasis prevention.