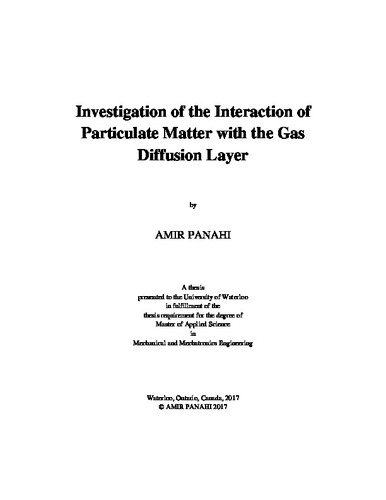 Rapid global industrialization has resulted in an unprecedented level of energy consumption. Transportation comprises a significant portion of the demand for energy, and special attention has recently been paid to green energy sources. Proton exchange membrane fuel cells (PEMFCs) are a promising zero-emission candidate: they use hydrogen and oxygen to produce electricity, with water as a byproduct. PEMFC is susceptible to performance degradation due to impurities in the hydrogen (anode) or oxygen (cathode) streams. While the effect of impurities in the anode side has been extensively investigated in the past, the impurities in the cathode, especially particulate matter, have not been studied extensively. Particulate matter contamination in cathode is a potential risk to optimal performance of PEMFCs in vehicular applications and the interaction is investigated numerically in this work. The most critical component of a PEMFC that can be affected by particulate matter, is the gas diffusion layer (GDL) due to its fibrous structure. Due to the random structure of fibrous media, a systematic approach is implemented where a single-fiber model is used as the most fundamental element of the GDL. The single fiber model is used for validation of flow and particle characteristics, paving the way for increasing the number of fibers. The multi-fiber model is challenged with particles of varying size confirming the dominance of the Brownian diffusion particle capture mechanism over other mechanisms for the target particle diameter of 0.1 µm. The operation of PEMFC requires high humidity levels in the cathode which must be accounted for in the particle capture model. The humidity in the cathode stream results in an increase in particle size, decrease in particle bounce, decrease in particle density, and decrease in air density compared to an otherwise dry cathode stream. Upon addition of the humidity model to the multi-fiber model of the GDL it is observed that of the abovementioned humidity effects, only the increase in particle size is significant. For the target particle diameter of 0.1 µm as the humidity level increases, the particles become larger, and the particle capture efficiency drops. This is due to the transition from the Brownian diffusion to the inertial impaction and interception particle capture mechanisms. Large enough particles whose capture is dominated by inertial impaction and interception, i.e. particles larger than 1.3 µm, have an opposite pattern: as the relative humidity level increases, particle capture efficiency for such particles increases. Given the high cathode humidity requirements for operation of PEMFC, it is critical to ensure the size of the particles at the GDL are below the threshold for capture mechanism transition. By implementing a fibrous filter upstream of the GDL, as the relative humidity increases, the particle capture efficiency of the filter, which is exposed to larger particles, increases, and the particle capture efficiency of the GDL decreases, meeting the optimal performance requirement.

Amir Panahi (2017). Investigation of the Interaction of Particulate Matter with the Gas Diffusion Layer. UWSpace. http://hdl.handle.net/10012/12008