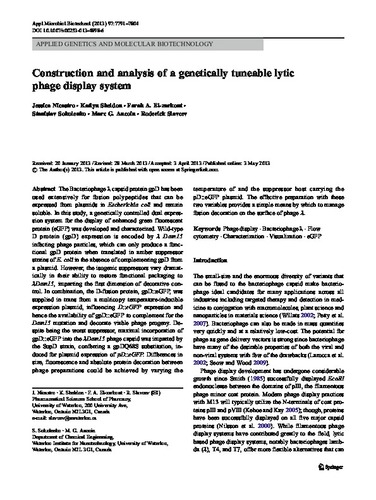 The Bacteriophage lambda capsid protein gpD has been used extensively for fusion polypeptides that can be expressed from plasmids in Escherichia coli and remain soluble. In this study, a genetically controlled dual expression system for the display of enhanced green fluorescent protein (eGFP) was developed and characterized. Wild-type D protein (gpD) expression is encoded by lambda Dam15 infecting phage particles, which can only produce a functional gpD protein when translated in amber suppressor strains of E. coli in the absence of complementing gpD from a plasmid. However, the isogenic suppressors vary dramatically in their ability to restore functional packaging to lambda Dam15, imparting the first dimension of decorative control. In combination, the D-fusion protein, gpD::eGFP, was supplied in trans from a multicopy temperature-inducible expression plasmid, influencing D::eGFP expression and hence the availability of gpD::eGFP to complement for the Dam15 mutation and decorate viable phage progeny. Despite being the worst suppressor, maximal incorporation of gpD::eGFP into the lambda Dam15 phage capsid was imparted by the SupD strain, conferring a gpDQ68S substitution, induced for plasmid expression of pD::eGFP. Differences in size, fluorescence and absolute protein decoration between phage preparations could be achieved by varying the temperature of and the suppressor host carrying the pD::eGFP plasmid. The effective preparation with these two variables provides a simple means by which to manage fusion decoration on the surface of phage lambda.