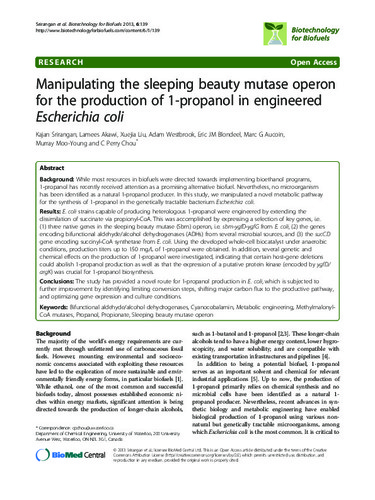 Background: While most resources in biofuels were directed towards implementing bioethanol programs, 1-propanol has recently received attention as a promising alternative biofuel. Nevertheless, no microorganism has been identified as a natural 1-propanol producer. In this study, we manipulated a novel metabolic pathway for the synthesis of 1-propanol in the genetically tractable bacterium Escherichia coli. Results: E. coli strains capable of producing heterologous 1-propanol were engineered by extending the dissimilation of succinate via propionyl-CoA. This was accomplished by expressing a selection of key genes, i.e. (1) three native genes in the sleeping beauty mutase (Sbm) operon, i.e. sbm-ygfD-ygfG from E. coli, (2) the genes encoding bifunctional aldehyde/alcohol dehydrogenases (ADHs) from several microbial sources, and (3) the sucCD gene encoding succinyl-CoA synthetase from E. coli. Using the developed whole-cell biocatalyst under anaerobic conditions, production titers up to 150 mg/L of 1-propanol were obtained. In addition, several genetic and chemical effects on the production of 1-propanol were investigated, indicating that certain host-gene deletions could abolish 1-propanol production as well as that the expression of a putative protein kinase (encoded by ygfD/argK) was crucial for 1-propanol biosynthesis. Conclusions: The study has provided a novel route for 1-propanol production in E. coli, which is subjected to further improvement by identifying limiting conversion steps, shifting major carbon flux to the productive pathway, and optimizing gene expression and culture conditions.