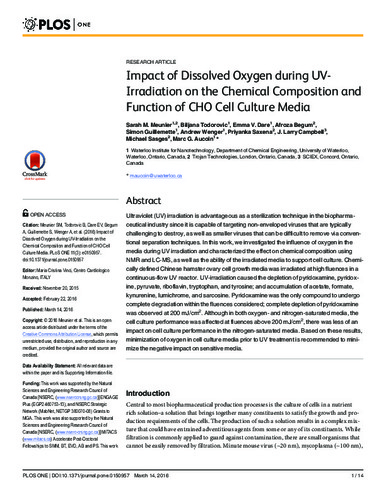 Ultraviolet (UV) irradiation is advantageous as a sterilization technique in the biopharmaceutical industry since it is capable of targeting non-enveloped viruses that are typically challenging to destroy, as well as smaller viruses that can be difficult to remove via conventional separation techniques. In this work, we investigated the influence of oxygen in the media during UV irradiation and characterized the effect on chemical composition using NMR and LC-MS, as well as the ability of the irradiated media to support cell culture. Chemically defined Chinese hamster ovary cell growth media was irradiated at high fluences in a continuous-flow UV reactor. UV-irradiation caused the depletion of pyridoxamine, pyridoxine, pyruvate, riboflavin, tryptophan, and tyrosine; and accumulation of acetate, formate, kynurenine, lumichrome, and sarcosine. Pyridoxamine was the only compound to undergo complete degradation within the fluences considered; complete depletion of pyridoxamine was observed at 200 mJ/cm2. Although in both oxygen- and nitrogen-saturated media, the cell culture performance was affected at fluences above 200 mJ/cm2, there was less of an impact on cell culture performance in the nitrogen-saturated media. Based on these results, minimization of oxygen in cell culture media prior to UV treatment is recommended to minimize the negative impact on sensitive media. © 2016 Meunier et al. This is an open access article distributed under the terms of the Creative Commons Attribution License, which permits unrestricted use, distribution, and reproduction in any medium, provided the original author and source are credited.